In remembrance of Martin Luther King, Jr. Day, this year we are looking back at the two trips he made to Western North Carolina at the height of the civil rights movement.

Dr. King’s first visit to the area was in January 1964, just a few short months after the assassination of President John F. Kennedy. King and several leaders of the Southern Christian Leadership Conference, headed to Black Mountain’s In-the-Oaks retreat, owned at that time by the Episcopal Diocese of Western North Carolina. The purpose of the retreat was to reflect on the prior year, plan the next steps in the civil rights movement, and to try to get some rest. The visit ended on a disturbing note when a bomb threat, which proved to be false, was received regarding the plane scheduled to take Dr. King back to Atlanta.[i]

In August 1965, King returned to Black Mountain to speak at the Christian Action Conference that was being held at the Montreat Conference Center. King, who was slated to be the keynote speaker on that Thursday, was delayed arriving due to his trip to Los Angeles following the Watts Rebellion. Dr. Gayraud Wilmore, Executive director of the Commission on Religion and Race of the United Presbyterian Church, stepped in for the opening address and spoke on the theme of “The Church and Civil Rights”.[ii]

Dr. King arrived at the conference in time to speak on Saturday, August 21, where he talked to the Presbyterian Assembly about the Church’s responsibility in the racial problems the world was facing. His speech, modeled after his 1961 Southern Baptist Theological Seminary address “The Church on the Frontier of Racial Tension”,[iii] touched on faith, morality, the Church, and racial segregation. During his sermon, Dr. King incorporated his experiences from his Los Angeles visit and emphasized his message of peaceful protest and action.

This year there are several events happening, both virtual and in-person, as part of Asheville’s MLK Day of Service. Participating in one of these events is a way to help honor and remember Dr. Martin Luther King, Jr.’s legacy.

You can listen to the full audio of Dr. King’s speech given at the Montreat Conference Center below.

The following books about the Civil Rights movement, desegregation, and African American life in North Carolina can be found among the African American History books in Buncombe County Special Collections:

The story of the Greensboro sit-ins and how four African American college students sat    down at a Woolworth’s lunch counter in North Carolina and ignited the civil rights movement in America.

In-depth look at the deadly conflict between a Communist-sponsored anti-Klan demonstration and a group of Klansmen and Nazi’s in the Morningside Homes housing  project in Greensboro.

Transcribed oral histories paying tribute women and men of color in Asheville who impacted their communities and helped make a difference.

Uneven Lies: The Heroic Story of African-Americans in Golf by Pete McDaniel

Portrait of the history of African Americans in golf. Features a section on local golfer John Brooks Dendy. 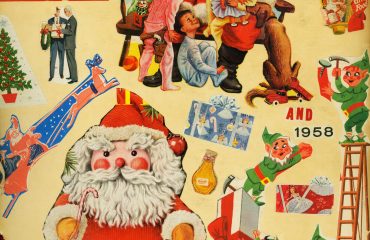