In the second half of the 19th century, the city of Asheville grew at a momentous speed. With this growth came an increasing need to build social services to support the region’s growing population. In answer to this, a small group of friends organized. All women, they were fathered by city-builders, war heroes, and successful businessmen. Such wealth fostered room for these women to invest their time and money into local philanthropy. And so, from this circle of friendship spilled out social progress. Charity services, schools, children’s homes, anti-cruelty campaigns, a hospital, a library, and other programs and institutions flooded the region. Beyond social services, the group also championed social rights for women. They supported the evolving status of women, and challenged these roles within their prospective social circles. With any opportunity, they encouraged the development of a modern woman, fettered no more by the constraints held against the women who came before them.

Of the group of female philanthropists, two individuals, Anna C. Aston and Fanny L. Patton, came into focus as developing leaders of their entire class – men included. Both played interconnected yet unique roles in the expansion of social programs in Asheville. Both Anna and Fanny provided examples of the modern woman to their peers. Educated, unmarried, childless, and filled with a desire to create a lasting impact, both women transcended the constraints of their gender in unexpected ways. Their approach to womanhood in their era accomplished great things within its own microcosm, a stark parallel to what was occurring on the national stage as women petitioned for suffrage, equal rights, education, and ultimately, power. One way to accomplish these goals was to network with other progressive women. Through the platforms they created, Anna, Fanny, and others, were able to open a route to national networks which allowed them to engage with other groups of likeminded women outside of their region. What resulted was a rapid increase in women-led programs in Asheville, a rise in female-facilitated discussions on social issues, and added attention to women’s rights and accomplishments. Women empowering women is a frequent underlying motivation within many of their efforts.

The Asheville Library Association came into being all in thanks to friends: Anna C. Aston, Fanny L. Patton, and Anna B. Chunn. The young women formed a reading circle in 1877[i] (although some accounts state it was formed in a Dr. Gleitzmann’s sanitarium in 1876.)[ii] The founding of the circle became an inspiring act from which the idea of a library was formed. In 1878, armed with one wagon borrowed from Fanny’s brother, one horse named “Pokey”, and a goal, the trio worked their way through Buncombe and surrounding counties to raise funds, collect subscriptions, and persuade citizens to donate books. One recount of their canvassing states, “They went through the mud — and what that was could only be known to residents of Asheville in ante-pavement days — to scattered households, unfolding plans, arousing interest, asking gifts of books, and receiving promises, some books, and much advice.”[iii] Their goal was to raise enough money through yearly subscriptions of $1.50 (roughly $37 now) to open up a reading room for the county. Through this, they were also able to collect donated volumes to stock the reading room. On February 5th 1879, their efforts paid off, and the Asheville Library Association was officially founded. The doors to the reading room opened that same year on the third floor of the courthouse. Anna C. Aston, Fanny L. Patton, and Anna B. Chunn had successfully collected over 700 volumes for the association. The reading room continued to move locations until 1894, when Pack Library officially opened. In its years of operation, the Asheville Library Association successfully opened a functioning library whose collection of publications had grown to over 2000 titles. “Asheville is one of the few towns of the South that owns a library building, and the city and its people may congratulate themselves…”[iv]

Founded in the spring of 1884, Flower Mission was organized as an auxiliary of the Women’s Christian Temperance Movement. Five years later, Flower Mission Aid No. 2 was founded in spring of 1889 to provide similar services to Asheville’s African American community. This was also an auxiliary of the W.C.T.U. No. 2. Flower Mission’s original purpose was to “carry flowers to homes of the sick and destitute, to prison cells, and to hospitals, and almshouses.” The flowers would often be accompanied by scriptures, treats, and songs.[v] Flower Mission developed into a charity which assisted the citizens of Asheville struggling with basic needs. These needs included food, fuel, prescriptions, transportation costs, hospital stays, and the care of children through the Children’s Home, founded in part by Fanny L. Patton. On the founding of the Children’s Home, an article written by Fanny L. Patton and published in the Asheville Citizen states, “This institution grew out of a conversation between Mr. J. E. Rankin, chairman of the County Commissioners, and the writer [Fanny L. Patton], in November 1889.”[vi] It opened on March 11, 1890. Under Flower Mission, work to build a hospital began in 1885. In December 1892, Mission Hospital officially opened. The hospital’s board was reported to be composed of “12 women assisted by an advisory of 5 men.”[vii]

The Women’s Edition of the Asheville Daily Citizen, published on Thanksgiving Day, 1895, was headed by Anna C. Aston, who served as editor-in-chief and Fanny L. Patton, who served as an associate editor. Other prominent socialites also provided material for the special edition. Included were recipes, local historical tidbits, tips on childrearing, and poems. Beyond these well-worn topics, the all-female staff for the special edition also highlighted achievements by women. A two-page spread contained charities founded in part by local women, including the Asheville Library Association, the Flower Mission Aid, the Children’s Home, the local chapter of the Women’s Christian Temperance Union, and the local branch for North Carolina’s Society for the Prevention of Cruelty to Animals. Anna C. Aston and Fanny L. Patton had much to do with most of the charities listed in the two-page spread. An article entitled, “Woman in Medicine” highlights the story of Dr. Elizabeth Blackwell, the first woman in American history to be certified as a medical doctor. Dr. Blackwell began her education in Asheville. The article was penned by another local doctor of medicine, Mary Olivia Nelon.[viii] Anna C. Aston reviewed The Heavenly Twins by Sarah Grand, a 19th century feminist writer who created the ideal of the “New Woman.” The “New Woman” possessed feminist principles of self-autonomy in love, education, work, and family. An editorial covered the Hull House, a progressive settlement house led by Jane Addams and Ellen Gates Starr in Chicago, Illinois. The Hull House had opened just a few years prior, in 1889. Feminism and social progress were both large themes in the special edition. Often, the writers remind the readers of their motivations for a Women’s Edition: to edify the community with feminine notions beyond the commonplace frivolities which often controlled material associated with women. The edition expresses its intent to attract the opinions and audience of men who supported the vision of the true, new woman. In a passage of an article written by Aston for the special edition entitled “A Woman’s Way,” she states,

Even that despotic undefined organism “Society” has been made to show deference to the true woman of the 19th century, and the showy nothings and exciting whirl and frivolous routine of the past are fast giving place to woman’s ideal of this sovereignty, and in consequence, public opinion is being transformed hereby.[ix]

Another article, penned again by Aston, entitled “Occultism and Psychic Phenomena,” outlines her beliefs in the greater occult movement, which include mesmerism, spiritualism, magic, psychical research, telepathy, psychometry, and Theosophy. In essence, many of these studies fixated on exploring the world of the unseen, which included research, experiments, lectures, exhibitions, and most notably, séances. Anna’s involvement in the movement may have been inspired in part from her relationship with Frances E. Willard, founder of the Women’s Christian Temperance Union. Frances E. Willard was a familiar face in Asheville during Aston’s life. Willard visited once in 1890, and later in 1896. Willard and Aston maintained a relationship through Aston’s involvement as a regional representative of the W.T.C.U. In the world of psychical research, metaphysics, and spiritualism, Frances E. Willard was a dedicated supporter. Her abundant involvement is well-recorded and established.[x] She was not only a participant in the movement, but also a leader. Upon Willard’s death in 1898, Anna C. Aston even wrote a touching eulogy in memory of her friend and hero, which was published in the Asheville Daily Citizen.[xi]

The occultism movement of the latter 19th century operated as a facilitator for social progress, including women’s suffrage. Because of its lack of an organized hierarchy, a shared belief in equality for all, and a very active network, many believers in the movement held similar social views. Thus, many participants of the occultism movement filled larger roles in the progression of women’s rights. Aston’s involvement was driven not only by interest, but also by her inclusion in greater conversations on women’s rights. Like the platforms created by Anna, Fanny, and friends, the occultism movement acted much the same as it provided a space for progressive individuals to connect to one another. Through the W.C.T.U., the Children’s Home, Flower Mission Aid, the Asheville Library Association and even the occultism movement, Anna, Fanny, and friends were able to access equality in new ways, empowering themselves, and their communities.

Join Buncombe County Special Collections and Esther Wright on Wednesday October 27 at 6 pm for a virtual program. Esther will share her research on these female leaders with time for Q&A.

Participants must register for the program.

Esther Wright is a recent History graduate of UNC-Asheville. She has worked with Buncombe County Special Collections as a research and public history intern. Her studies in Appalachian history include a sub-focus on women’s history and Black history, with an emphasis on their contributions to the development of the region.  She plans to pursue a doctorate in History with hopes of attending UNC-Chapel Hill in the Fall of 2022. 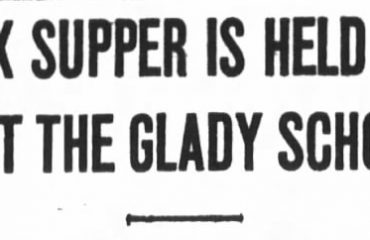