A few months ago some questions arose about a couple photographs in the North Carolina Room’s Special Collection. They show a group of African-American masons erecting a wall up against a building with a large “Drink Pepsi-Cola” sign painted on it.

Zoe asked me if I could confirm the details in the description. Here’s part of the original NC Room Database Entry:

“Two small sepia-toned black and white snapshots showing a crew of African American brick masons building a wall. The building next to the one being constructed has a huge Drink Pepsi-Cola sign painted on the wall. This is probably the Pepsi-Cola Bottling Co. at 322-324 Southside Avenue. The 1917 Asheville City Directory lists the Pepsi Cola Bottling Co. at 322-324 Southside for the first time. In the 1918 ACD two new buildings west of the bottling plant are listed. They are 326 Southside (vacant) and 328 Southside (J. Frank Phillips general store). The Nov 1917 Sanborn Map of Asheville shows all three brick (pink on the map) buildings. Past the building under construction can be seen a one-story brick duplex. The 1917 Sanborn Map of Asheville shows a row of three small duplexes on the north side of Southside Avenue across the street from the bottling plant. The brick masons in the picture are probably the crew of Miller and Sons, a company founded by former slave James Vester Miller. In the early 1900’s Miller and Sons was one of the leading construction companies in Asheville. Prints donated 2-2011 by Joe White.”

The more I looked at the photos the more errors I found in this description. In 2013 I spent a lot of time digging into the Housing Authority of the City of Asheville Archives at the D. H. Ramsey Library Special Collections at UNC-Asheville. I was focusing on the Southside neighborhood before urban renewal, and I got far enough into it that I knew just about every building that used to exist in that neighborhood.

Other than a stamp on the back of the photos indicating that they were processed by Robinson’s Kodak Store in Asheville, N. C., there’s nothing in the images to tell us who the brick masons are; where the buildings are located; and even if the location is in Asheville at all.

The 1917 Sanborn map above shows the Pepsi Cola Bottling building as described in the Database entry.

However, the buildings in the background of photo L794-4b are not what’s shown on the 1917 Sanborn map. Southside was a wide boulevard at this location and the houses across from the Pepsi Bottling building – #331, #325 (329), and #327 – were perched a good many feet up on a hill above the street. (The “D” for each property stands for “dwelling unit”, not “duplex.” Many un-related people may have lived in each house; but the buildings were designed and built as single-family houses.)

L794-4b shows the building fronting on a narrow street. Across the street are a sidewalk, a narrow expanse of lawn, a one-story brick building and one or more multi-story buildings towering directly behind it. This does not correspond with the Sanborn map.

The image above shows the Pepsi-Cola Bottling Co. building and how much wider Southside Avenue was in the 1960s. (By then #322 housed an auto repair shop.)

L794-4a shows a multi-story building at the back of the building against which the masons are working. A gap appears between the two buildings which leads me to believe an alley separates the two. However, the Sanborn map shows that the Pepsi-Cola Bottling Co. building backed right up to the edge of Town Branch, and there was no second building behind it.

Finally, just because “Drink Pepsi-Cola” is painted on the side of the building doesn’t mean that that’s the bottling company building.

Step #2 – Tracking Down the Correct Location

The two photos show that the masons are working on a building in a valley, not on a flat street like Southside. I started looking at different multi-story brick buildings in the Southside neighborhood that backed up to a hill, but none matched the building in the photos.

So I started looking elsewhere in the 2017 Sanborn maps. The most significant clue was the row of one-story brick residences across the street in L794-4b and the buildings towering over it.

I found them on North Lexington Avenue.

The blue arrow shows roughly where the L794-4a photo was taken; and the black arrow shows L794-4b.

The red circle indicates the one-story brick residence directly across the street in L794-4b and the green circle indicates which house on Penland Street (Rankin Avenue today) is in the background.

So, my conclusion is that the brick masons are laying up the north wall of #88 N. Lexington Avenue, against the wall of #90, the building at the corner of N. Lexington and W. Woodfin Avenues.

Above: There’s a gap between #88 and #90, and a notation showing two 12” thick walls, the one with the Pepsi-Cola ad on it, and the new one being erected.

On the Sanborn map, the “2” at the west end and the “1” at the east end indicate the number of stories at each end of the building; so, there’s an alley at the back of the building one story up from the street elevation.

Above: A Google Street View of the north elevation of the #90 building today shows the stepped parapet wall, the elevation change, the alley, and, on the uphill side, the building seen in the background of L794-4a. The section of the building to the left of the alley was added after the L794-4a photo was taken.

So, that closes the door on that part of our inquiry; but a new one opens up.

What was that narrow strip of buildings?! I’d never seen anything like it.

In the City Directories it was called Greer’s Row.

At some point, storefronts were built in front of the dwellings.

By 1956, it contained a row of small businesses. (The Greer’s Row units are the odd-numbered ones.)

Finally, to conclude with a small bit of serendipity, Emery Moxley, the barber at #81, was still giving haircuts to people up through 1981. I know this because he was my barber after I moved here in November 1978. 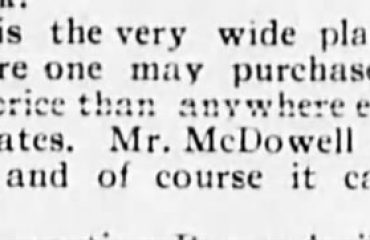 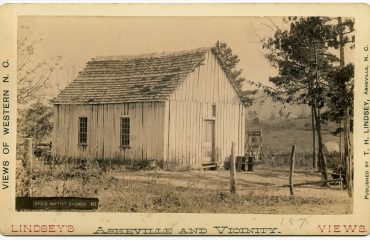 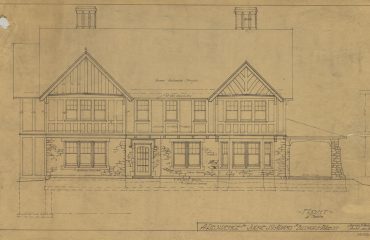 4 Comments to “ Correcting the Record.”