One of the resources hiding away in the North Carolina Room reference stacks are various church histories and minutes. Most of the time, these valuable records sit around on the shelf and do not see much use. If you think about it, it’s easy to understand why. On the surface, it may not seem like there is much to learn about the community at large from church minutes. At first glance, or with only a basic understanding of what the minutes contain, one might believe that they are simply a record of membership, articles of faith, a few obituaries, and the annual finances. However, these records, Baptists’ records in particular, tell a much more intimate picture of community than most of us might realize.

There are several churches in Buncombe County that could compete for the superlative of longest established congregation. Among them, is Flat Creek Baptist Church, located in its present physical form just off of Old Mars Hill Highway in the, you guessed it, Flat Creek Township.

This congregation is supposed to have begun in 1811 with a meeting in the home of Thomas Gentry, a local farmer. However, we don’t know much about the community until records pick up in 1835. The church made their first major effort to preserve these records in 1961 at their sesquicentennial (150 year) celebration, collecting an offering to have the minutes microfilmed. Some years later, in 1986, Norma Dillingham Morgan, in association with the Southern Appalachian Center at Mars Hill College transcribed and abstracted the minutes. Abstracted minutes help condense them for printing, and leave out intimate and potentially sensitive details.

Inside these minutes are little smatterings of the early history of the Flat Creek Community, how they interacted with other nearby communities, their priorities, and short obituaries of lost loved ones. The frequency of membership growth during different periods indicates revival, and the 19th century Baptist process of “finding fellowship” shows us how neighbors used the church for not only worship, but conflict resolution that might otherwise have been handled in court.

“We will petition Newfound for ministerial assistance”

By 1835, Flat Creek belonged to a local association of Baptist churches that looked to each other for community fellowship and ministerial assistance at various times. Most often, this assistance was called for when the church voted to have a sacrament service. This would typically include Baptism and communion with multiple pastors present.

A baptism service with the congregation of Chestnut Grove Baptist Church in Sandy Mush. B912-5.

These meetings created an opportunity for more than sacraments. They were a chance for people from far flung communities to congregate with one another, meet potential partners (for business and love) and discuss politics. When moving mail and news was slow, these large community meetings became a commons of ideas, news, and perhaps flirtation.

“And they are no more of us”

Early Baptist preferred to settle conflicts and matters of discipline within their community, rather than taking their claims to civil court. These minutes reveal some of the to use their words, “wrongs” “hurts” and “transgressions” of neighbors against the church’s teachings and against their neighbors, and how they were settled. The church doctrine taught that the best means of conflict resolution was laid out in Matthew 18:15-17.

(15) “If your brother or sister sins, go and point out their fault, just between the two of you. If they listen to you, you have won them over. (16) But if they will not listen, take one or two others along, so that ‘every matter may be established by the testimony of two or three witnesses. (17) If they still refuse to listen, tell it to the church; and if they refuse to listen even to the church, treat them as you would a pagan or a tax collector.

The first clear example of this in the Flat Creek minutes is in April 1836 where the directive for conflict resolution in Matthew 18 is referred to as the “proper gospel steps,” as the church discussed a major case of an interpersonal conflict between Samuel Morgan and Nancy and Jesse Gentry:

Flat Creek Church members used this process to settle everything from reports of what was at the time, considered immoral activity to what could have become civil disputes.

Mira Buckner (or Sams) was excluded from the congregation for dancing:

And a case of stolen mill irons between Joseph Ellers and J.H. Wild was settled by a committee over the course of about two months. Ultimately J.H. Wild was excluded from the congregation.

Exclusion in the Baptist faith is akin to excommunication in the Catholic Church. According to some scholars, in this time period somewhere between 2-3 percent of all church members in the South were excluded from their congregations for some transgression or another. Some were reinstated, while other joined other Baptist congregations or denominations.

“He is with his Beloved Saviour in the Glory World”

Another major feature of the early Flat Creek Baptist minutes are obituaries for community members that may not be found in any other source. Today, and even in the early 20th century, it is relatively easy to locate these short biographies and testaments of faith in newspapers, however, before and during the Civil War, and for enslaved people especially, obituaries for middle and lower class people are much more difficult to locate.

The Flat Creek minutes are filled with fond remembrances of beloved community members, some young and some old. One that stands out as the most unique, though, is for an enslaved man called Abraham.

Abraham was not the only enslaved person to be a member of Flat Creek. A woman referred to as “Black Hannah,” enslaved by a Mr. Weaver. In the research for this article, I attempted to locate any supporting documents for these two enslaved people, but none were found. Abraham was probably born and purchased in Virginia. And unfortunately, Hannah, like many enslaved people, left almost nothing but her name behind in the written historical record. Thanks to these minutes, though, we know that one more name of an enslaved person in Buncombe County.

From the minutes, it appears that the congregation had mixed feelings on matters of politics, tending to lean somewhat liberal for their time and place. In 1855 the church excluded a member because of their support for the Know Nothing Party and had accepted enslaved people as full members “in fellowship” with the church, including them on their regular membership roll. (Other churches in the area,  like Reems Creek Presbyterian, where the family of Zebulon Vance worshiped, held separate rolls for enslaved people, read more here:Enslaved People of the Vance Family)

Despite a feeling of liberalism and acceptance for “sable” brothers and sisters in the congregation, we find that two church members lost their lives in the Civil War, and both fought for the Confederacy, which was absolutely the norm in Buncombe County.

For this article I focused on minutes taken before and during the Civil War. But the copy of the abstracted Flat Creek Baptist Church minutes we hold in the North Carolina Collection includes records up to 1931. If you are interested in diving in deeper, the print copy makes note that there is a copy of the full written minutes on microfilm at in the library at Mars Hill College (now University).

Other resources for learning about the intricacies of early southern and Appalachian Baptist communities include these works:

Strangers Below by Joshua Guthman

As a reminder, this post is a part of our 52 Weeks, 52 Communities Series. In this series, we are covering a different Buncombe County community each week. Do you have materials related to Flat Creek or some other Buncombe County community you’d like to let us know about? Do you, your parents or grandparents have a good story to tell? Interested in learning more about Fairview? Please let us know! We want to hear from you!

The North Carolina Room is Buncombe County’s Public Archive, we want to help preserve and make accessible the history and culture of Asheville and Buncombe County for all its residents. 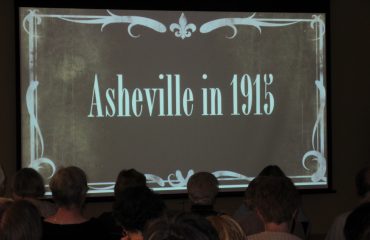 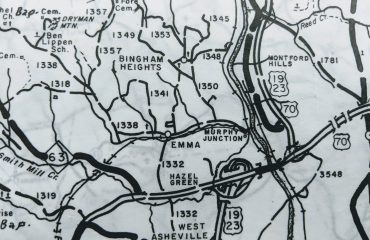