“My parent’s favorite spot for dinner and dancing was Margaret’s Supper Club on the Weaverville Highway.” After a recent North Asheville History Project oral interview, Ed Sheary, who grew up at 37 Melrose Avenue, was talking about brown bagging prior to 1979 when Asheville enacted the liquor-by-the-drink law. People would take their liquor to a restaurant (which at that time would not have had a liquor license) and the wait staff would serve it to you. Frank and Margaret Sheary would also dine at the Sky Club on Beaucatcher Mountain.  The name “Margaret’s Supper Club,” intriguing as it is, caught my curiosity. . . And down the rabbit hole I went.

Margaret Fleming, who after 10 years of operating the Lantern Grill on the Beaverdam road and then in the old Governor Craig residence on the Black Mountain highway, opened Margaret’s Supper Club first at 72 Broadway downtown Asheville. A newspaper notice said she was leasing the Ambler building, which I was not familiar with. I thought it would be fun to see which building housed the supper club.

Solon “Flem” Fleming’s specialty was “a real steak dinner–the steak cooked just right and all the best trimmings.” Mrs. Fleming’s pride was her Southern Fried Chicken dinner which she said, “was the best in the whole South.” [A C-T Sept. 16, 1935]

Margaret did move her restaurant in 1940 to the Weaverville Highway, just past Beaver Lake. Margaret was fined $25 in 1938 for violating the liquor laws when “about a case of whisky was confiscated in a raid at the dine and dance place.” [A C-T Aug. 4, 1938] Several other fines and loss of beer license occurred. As they did at Emma Adler’s Sky Club, and Russell McKenzie’s Chez Paul restaurant. [“12 are Convicted of Liquor Law Violations” A C-T August 17, 1957.]

Asheville Citizen Times newspaper columnist, Carole Currie, wrote that “her father warned her never to go to Chez Paul or the Sky Club because both sold mixed drinks illegally and they were regularly raided.” He didn’t want her to get caught in a raid. She went to Chez Paul anyway, shortly after getting married, because there was a dance band and they had good steaks. [A C-T March 6, 2016.]

Margaret’s Supper Club claimed to be “Asheville’s oldest Supper Club,” dating back to 1929. It closed in 1975 after the death of Margaret’s husband. Margaret, then a resident of the Vanderbilt Apartments, and a member of St. Mary’s Episcopal Church, died in 1981.

But, back to the rabbit hole and 72 Broadway. An internet search led me to a photograph in the E.M. Ball Collection in U.N.C.A.’s Special Collections, “B1815.” It is identified as the “Ambler home, later American Legion Home on Broadway” and has the description: “Home of Dr. Arthur Ambler, physician of Ambler Heights Sanitarium. Brick.”

72 Broadway, used with permission from U.N.C.A. Special Collections, B1815.

When I first looked at the building I thought it would be at home on the Biltmore Estate, perhaps part of the farm and stables. Further searching for Ambler’s home took me to an article announcing that Dr. Arthur C. Ambler would be maintaining his offices of general practice of medicine in the building occupied by his father, Dr. Chase P. Ambler. [A C-T article of June 28, 1921]

And that led me to the building’s architectural drawings that are in our North Carolina Room collection. The plans were drawn by none other than Smith & Carrier. Richard Sharp Smith and Albert Heath Carrier were in business together from 1906 until Smith’s death in 1924. R.S. Smith of course was superintending architect at the Biltmore Estate.

Until 1957 when the City of Asheville made them an offer. The city would demolish the building and operate a parking lot on the property, and the post would lease it from the City, with the City giving back 45 per cent of parking proceeds. The site would “be the first off-street municipal parking lot on Broadway.” [Italics added. “Asheville Citizen-Times” Jan. 9, 1957.]

The last article I found concerning the fate of the Ambler building was an A C-T article on May 12, 1957 and it was horrifying! 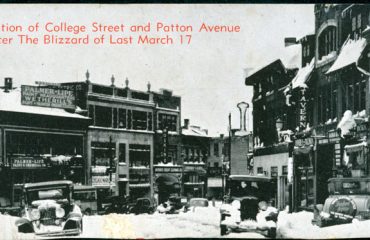 5 Comments to “ Margaret’s Supper Club, A Smith & Carrier Building, And A Wrecking Ball”