It is common for local historians to say of the Asheville, Loan, Construction & Improvement Company, that the “enterprise languished until it was taken over by George Willis Pack.” (Quote from Asheville’s Historic Montford District, edited by Michael T. Southern, 1985.)

What the Asheville, Loan, Construction & Improvement Company did do needs to be on record.

After the company incorporated in March 1889 and purchased the property of over 600 acres for the new suburb in June of 1890, street infrastructure began in October with the plat of the property drawn up in December.

By January 1891 the company had in place a complete water and sewer system, and with the addition of streets laid out with paved gutters, and with shade tree plantings and sidewalks, spending was over $35,000 by May 1891. The company sold 400 acres in June to Major Robert Bingham for the Bingham Military Academy. Two lakes were full and a trolley system was in place by July 1891.

For several weeks prior and up to July 6, 1891 the ALC&I ran an advertisement for the sale of the company’s choicest 50 lots to be held July 28 -29. “The demand for this property has been unprecedented in the history of Asheville real estate, and its success as the popular resident part of the city has already been assured, there now being over $125,000 worth of buildings completed and under contract to be finished by 1st of October next.” Terms of the sale were, 1/4 cash, balance in 1 and 2 years, at 8 per cent.

Oddly enough, an ad ran July 7, 1891 “Withdrawn for Reasons Extraordinary.” The company had such success in private sales prior to the public sale that they had to withdraw the public sale.

By the end of 1891 the trolley track had been extended via Cumberland to the city limits at Panola Street and “Mayor” Rumbough’s home. The push was on to get the trolley to the French Broad River.

One of Montford Park’s larger homes, the James Edwin Rumbough House at #49 Zillicoa Street as built circa 1892. The carriage house at #41 Zillicoa Street is seen at left. Streetcar tracks show across the foreground. When Montford was incorporated in February 1893, J.E. Rumbough became its mayor. The home was acquired by Highland Hospital in 1952 .

In March 1892, George S. Powell, president of the ALC&I returned from a month long trip to Baltimore and Philadelphia, saying that “the $20,000 issue of bonds recently authorized by the stockholders of the company are now (being printed) and will be ready for the market by May 1.” “He says there will be no trouble in placing these bonds, the probability being that they will be sold by the time they are printed.” The sale of the bonds was needed to extend the Montford line to the French Broad.

Approach to the entrance of Riverside Park after the trolley had finally reached the river. In the foreground are railroad tracks; a sign to the right says “RAILWAY”. To the left is the French Broad River. In the background is the entrance to the park. Photo by John D. Caldwell, 1905-1910.

1892 was the beginning of a several-year depression for the whole country. March was still early in the year and perhaps the ALC&I Co. still felt confident in their new suburb. Obviously, they would not yet know how bad the recession was going to be. Selling bonds rather than stock was a way to raise money, since bonds allow investors to lend money to a corporation and receive interest back, but it would have meant further financial obligations in the end. By the end of 1892, the company had only sold 2 lots.

The news reportage falls silent concerning Montford Park for more that a year after the March 1892 article, with the exception of Montford being incorporated in February 1893.

Panoramic view of Riverside Park. View roughly southwest from Hibriten Drive towards Riverside Park showing a car on the loop track at the entrance and the Car House.” Circa 1905

This conveyance was reported as “one of the largest deals consummated, in Asheville for some time.” The syndicate paid $24,000 for the Montford Avenue car line. One of the stipulations was that the new owners would ensure the extension of the line to Pearson’s Bridge, adding one mile to the line. The extension was reported as just about complete on September 15, 1893. “Despite the financial panic, the Montford line was extended around the grounds of the Coxe Estate (known of as “The Klondyke” at #475 Montford Avenue) and through the woods to the French Broad River at Pearson’s Bridge, providing access to Richmond Hill on the west bank of the river.” [Trolleys in the Land of the Sky, page 13.] The ALC&I’s sale of their trolley system appears to be the first substantial evidence that the company was in financial difficulty, even though, by the end of 1893 the ALC&I had sold an additional twenty-two lots.

The Asheville Loan, Construction & Improvement Company had created and established the most popular residential neighborhood in Asheville, and it remained so until the 1929 Great Depression. 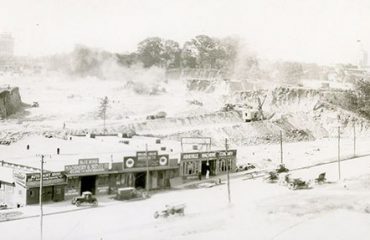 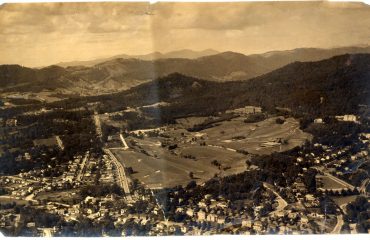