Asheville’s first parking garage was at 11 North Market Street. It was built in 1926 for the Western Carolina Auto Co. Except it was called an Auto Hotel. Historical research on the building for the Urban Trail marker for transportation, found that the building had an overhead bridge connecting the auto house to the Langren Hotel.

The vacant building at 11 North Market as it appeared in the early 1980s.

In the  1920s Harry Blomberg built a parking garage also to serve the Langren and in 1930 Blomberg opened a parking garage on Haywood with his auto showroom to cater to the people staying in the Vanderbilt Hotel.

Sign for Harry’s garage on Haywood Street in 1973 soon before the building was demolished to begin construction of Pack Memorial Library (1978) on this site. C301-4

In an Asheville Citizen article titled “Changing Tide of Parking Needs” April 18, 1974 the writer talks about how the location for the new Civic Center parking garage “will return what used to be Blomberg’s garage back into the original use for the building–downtown parking.” The $1.9 million 8-story parking garage supplied parking for 600 cars and was dedicated September 1, 1976. It was really the city’s second Auto Hotel–built 50 years after the first Auto Hotel on Market Street.

There was only one problem with it.

Few people parked in it! Either people, especially tourists, didn’t know where it was, or locals did not feel safe parking in it. Or, they didn’t like paying for parking. After the Asheville Mall opened up people thought parking there was free, not realizing that “free parking” was reflected in the pricing of merchandise. Also, at the mall, someone might walk quite a few blocks to get to the store in view in front of them, but did not like parking in a downtown parking garage and walking around a corner to a store that wasn’t in view. The photograph above is from an article, “Which Comes First? Parking Spaces Or More People?” Asheville Citizen-Times March 30, 1980

So imagine Leslie Anderson’s job as Director of the Downtown Development office trying to persuade Asheville City Council and the Asheville Downtown Commission that the city needed more parking garages. It was a known problem that the Civic Center Parking Garage, built in 1976, had an occupancy of under 50% when there were no events at the Civic Center.

“Why do we need more parking garages?” Larry Ward, planning and research director for the city’s public works said, “You can’t go out and add parking until you see the need or additional demand.” (A C-T March 30, 1980)

In the first part of the decade, development by private investors took off, including the Haywood Park Hotel and Promenade, Tops for Shoes expansion, Sixty Haywood apartments, The Shops-Wall Street, and individual building renovations.

The next parking garage was planned in 1985 and opened in 1988 on city owned property at Rankin and College Streets, less than a block away from the Civic Center facility with a capacity of 268 spaces.

View from Walnut Street looking at back of Rankin Street Parking Garage and walkway connecting it to the back of the Loughran/Smith & Carrier Building under renovation into condominiums. Spring, 1997. J147-5

In the spring of 1988 the Wall Street parking deck opened to provide 260 parking spaces.

“Those were some courageous decisions,” Leslie Anderson says of the city council and other officials who said yes to building more parking garages. “It was brave politically, and they should be commended. It was smart investing by the public sector because it stimulated private investment and other public projects. The parking decks were revenue funded and the city was able to pay off the bonds years before they were due.” Revenue generated now from the decks pays for all parking upkeep, staffing, and maintenance.

The third parking deck that opened in the 1980s is on Biltmore Avenue at Eagle Street with 320 spaces. It was part of the Pack Plaza office/retail development. Though privately owned it also offered some public parking from the beginning and serviced parking needs for the Pack Place Education, Arts & Science Center. It received a federal Urban Development Action Grant of $3.4 million from HUD.

Interesting enough, at the last Asheville in the 1980s program, “New Housing and Old Buildings” several people in the audience voiced their opinions that Asheville currently has a big parking problem. Karen Ramshaw, a panelist of the program and with Public Interest Projects, agreed that we currently have a serious parking problem and that it is just as important as it was in the 1980s, and “that we need leadership from our City staff and from our City Council”. . . Looks like maybe we could use another Auto Hotel, or two.

Please join us for our sixth and last program in our series.

Sixth Program in the Series

Panelists for the Political segment include:

Panelists for the Civic engagement include:

Karen Tessier, Grace Pless and Al Whitesides, each of whom were involved in our community and especially downtown in numerous ways in the 80’s. 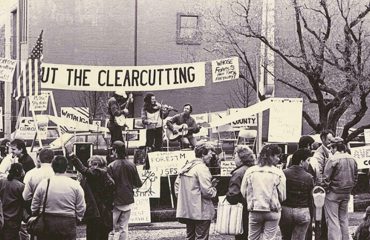 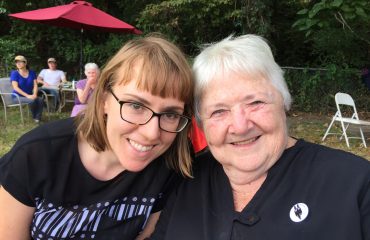 Event: A Local Artist’s Lifetime of Work Gets Digitized By an Digital Historian