What do these have in common: The Asheville City Parks & Recreation Department, Quality Forward, Community Arts Council and the Asheville Chamber of Commerce, along with thousands and thousands of volunteers?

FESTIVALS!  They all worked together in the 1970s and 1980s to create a broad range of festivals that were created in part to bring people back downtown. They worked together to created what became a major factor in Asheville’s revitalization its end-product which is so visible today.

Quality Forward (QF) was launched in January 1977 to continue the work done by Quality 76 which, in conjunction with the national bicentennial, was created to upgrade the quality of life in Asheville and Buncombe County. I used to think Quality Forward was about cleaning up trash and planting trees. But they had a Cultural Division, and its initial goal was to re-institute a downtown summer festival, similar to the Rhododendron Festival of bygone years. And I’d always thought that the Arts Council, known then as the Community Arts Council of WNC, was specific to promoting local artists through gallery shows and funding. But they were as much involved in the cultural life of the city as was the City’s Parks and Recreation Department.

Hallelujah Asheville! was born in 1976 the same year as the Bicententennial. It was no small festival. It was a 10 day festival! Sponsors were QF, Parks & Rec, and the Arts Council. Leslie Anderson, chairman of the festival, said “Early on, we’d plan an event and ten people might show up, and we’d go, ‘Great,’ and do it again! An early test run of a 3 day festival the previous fall enthused the heads of the sponsoring departments to keep growing. And that they did. Deborah Austin was the administrator for the Arts Council during this decade, and early on Jean Webb represented Quality Forward.

The local artists had much to gain. For the most part, local musicians, story tellers, poets, artists, actors and handcrafters made up the festival calendar.

The first Bele Chere’s festival was in 1979. The chairman of the 1979 Bele Chere committee said, “Literally hundreds of community-minded individuals have taken time from their business and personal lives to contribute to the implementation and success of Bele Chere. It’s going to be the biggest thing that has happened in Asheville in years.”

Sunday In The Park began in 1980 as an entertainment series. It was not only Downtown, but was county wide. Sponsors were QF, Parks & Rec, and the Arts Council.

Light Up Your Holidays was created in 1983 to create an interest in Asheville during a traditionally slow time in tourism and to take advantage of Biltmore Estate’s Christmas at Biltmore. Sponsors were QF, Parks & Rec, and the Arts Council. During the 1986 celebration the Downtown Development office reported that “nearly 400 volunteers have worked weeks, and in some cases months on festival details.” They also reported that “from 1983 to 1985, December travel revenue rose 52%.”

Please join us for our sixth and last program in our series.

Sixth Program in the Series

Panelists for the Civic engagement include Karen Tessier, Grace Pless and Al Whitesides, each of whom were involved in our community and especially downtown in numerous ways in the 80’s. 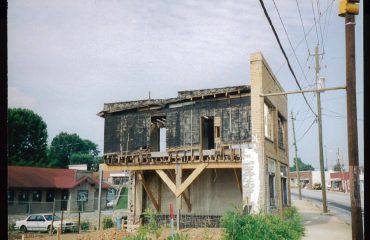