Rob Pulleyn, former owner of Fiberarts Magazine and Lark Books moderated a panel of 1980s business owners in “Businesses & Restaurants” part 2 of a 6 part series, “Asheville in the 1980’s: A Formative Decade Told By Those Who Shaped it.” Pack Memorial Library, Lord Auditorium, May 25. 2016.

Bob Carr of Tops for Shoes, Pete Apostolopoulos of the Mediterranean Restaurant, Wayne Caldwell of Sluder Furniture & Ambiance Interiors, Att. Eugene Ellison, former Asheville City Councilman and restaurant owner, Paula Dawkins of Jewels that Dance and Mark Rosenstien of the Market Place Restaurant. You couldn’t have found seven other people who were more different from one another. But they shared quite a few things in common.

Pete Apostolopoulos of the Mediterranean with Bob Carr of Tops For Shoes on left and Wayne Caldwell on right.

Carr’s and Caldwell’s businesses were inherited from the family’s previous generation. New entrepreneurs found rents that were dirt cheap. The buildings had nice architecture, even the boarded up ones. There was a vestige of a wonderful city under the pall. Though cockroaches were plentiful and there was a disconcertingly small number of customers.  Tense times of meeting payroll was common among them and they kept on going.

Paula Dawkins of Jewels that Dance. She traveled to shows around the country to sell her jewelry to make a living that did not come from her first storefront on Lexington Avenue.

Attorney, Eugene Ellison, an Asheville native who was raised in the Hillcrest Apartments. His slogan running for Asheville City Councilman was “From the lowest to the highest.”

Each business person had their own work they were pursuing, their distinct challenges to face, but they each cared about the other. There was a community between them and Wednesday evening that community was palpable.  The community was Asheville in the 1980s. These business persons were the early investors.  They invested their time, creative energy and took real financial risks. They cared about their role as downtown Asheville’s  pioneers. These people deserve recognition. These people made Asheville viable.

Constance (of Constance boutique) and sister-in-law Amy Ensner proprietor of 23 Page Restaurant saluted women owned businesses in the 80s. When Amy talked Constance into considering moving here, Constance did her own marketing survey. When she met women on the street in cool clothes, she asked them where they got them. “Not here,” was the typical response.

Hashim Badr of the Asheville Discount Pharmacy talked about working for Eckerd’s downtown, but when they closed in 1982, there was no pharmacy to fill in the need for downtown’s residents and elderly, so he opened his own pharmacy.

Another SRO crowd for Pack Library!

Click below to watch Wednesday night’s slide show on “Businesses & Restaurants” in Asheville in the 1980s. The images further document the number of people who gave so much during this time. 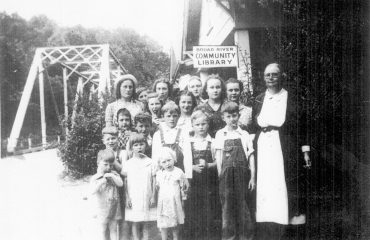