Interesting things were going on in downtown Asheville in the late ’70s and throughout the ’80s. Lower rents and sagging property values lured entrepreneurial/creative small businesses and restaurants to join long-standing small businesses to make downtown the vibrant and viable place we now see around us.

O.Henry’s Restaurant opened at 59 Haywood Street on October 13, 1976 by original owners Jay Bentley and his partner Tony DeRose. It began as a sandwich restaurant and served beer and wine. They used to have a line out the door at lunch time. They quickly gained a reputation as being gay friendly. Female mannequins in long silk dresses stood on the second floor balcony, along with large plants, antique lights and Greek statuary. O.Henry’s and Gatsby’s Bar and Restaurant were the (only?) places to hear live music unless you drove to McDibb’s in Black Mountain. College students were regular customers at O. Henry’s, as were residents of the Vanderbilt and Battery Park apartments. In 1988 the business went private in order to sell mixed drinks and the restaurant was phased out. In 2001 O. Henry’s moved to a free standing building, which they were able to buy, at 237 Haywood. Celebrating its 40th year in business in 2016, it is the longest running gay bar in North Carolina.

In June of 1976 Chan and Miegan Gordon opened Captain’s Book Shelf at 61 Haywood, on the north side of O.Henry’s. The newspaper article announcing the opening said that the downtown business district was “showing signs of coming alive again. Not the same Asheville of decades past, a new type of business community is emerging.” The article pointed to “young people willing to take on the challenge, although insistent upon putting their own stamp on the district.”

Chan Gordon commented, “When we were looking around for a location we decided on downtown even though it’s suffering. We feel as though it will be resurrected. Downtown is the most centrally located area and the parking problem isn’t as great as many people say it is. The Civic Center and the library are here. It’s a good place for the future.”

Ad for Captain’s Bookshelf showing Chan and Miegan Gordon with Bonnie Butler out front of their earlier location at 61 Haywood Street.

Gordon also credited his landlord, Jack Woodcock who helped prepare the building for occupancy. “He extended himself financially to provide this place with good furnishings and décor. I hope other property owners will follow his example. Unity and cooperation will revitalize the downtown again.”

Captain’s moved to Battery Park Avenue in 1982 and later to their current location at 31 Page Avenue and are now celebrating their 38th year in business.

When Captain’s moved out of 61 Haywood, Emoke B’Racz and Pickett Huffines opened Malaprop’s Book Store and Café in its place on June 1, 1982. They chose Asheville because they wanted somewhere with a cultural center, even though their early experience of working downtown was that it was mostly abandoned. Emoke says, “You could walk 3 blocks in any direction before you found a door not nailed down.” But the low rent gave them the chance to invest all their money in inventory. They also chose to stay here after driving into town and hearing that the “level downtown” (Strouse, Greenberg & Co. mall proposal) was defeated.

Just 14 years later, with Malaprop’s securely anchored in the community, the store was among the top 13 independent bookstores in the country. They moved down the street in 1997 to their current location at 55 Haywood Street after that buildings’ renovation. They are celebrating their 34th year.

David L. Brown opened Gatsby’s Bar and Restaurant in 1978 at 13 West Walnut Street, current location of Scully’s Bar and Grill. Participants in the Wrap recall going to Gatsby’s afterward and “drinking lots of beer.” On November 4, 1981 proponents of “Save Downtown Asheville” who were against the Strouse, Greenberg & Co. mall complex that would have demolished 11 acres of downtown buildings, went to Gatsby’s to wait for the vote count to come in on the $40 million redevelopment bond needed to finance the project. David Brown stood above the crowd and hollered out the vote counts as they came in. When he was able to report the bond proposal was rejected, he took this photo from inside his restaurant.

Can you imagine Asheville being what it is today without these early entrepreneurs? Come hear business leaders discuss the challenges and successes of starting and maintaining small businesses downtown during the 1980s.

A  Formative Decade Told by Those Who Shaped It

The second program of the series is Wednesday May 25, 2016 from 6:00 to 7:30 in the Lord Auditorium, lower level. All events are free and open to the public. The program is sponsored by the Friends of the North Carolina Room.

Panelists: Bob Carr of Tops for Shoes, Paula Dawkins of Jewels that Dance, Pete Apostolopoulos of the Mediterranean, Kathryn Long of Ambiance Interiors, Mark Rosenstein former owner of the Market Place Restaurant, and Attorney Eugene Ellison owner of the Ritz Building on The Block and former Asheville Vice Mayor.

Other guests also representing business in Asheville in the ’80s will be present. 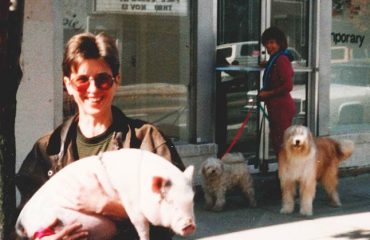 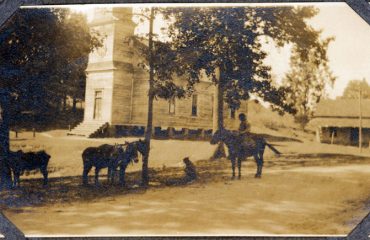