When did Asheville’s renaissance begin?” We are often asked that question in the North Carolina Room. It is also the topic of a lot of published articles. Most responses turn straight to the 1990s. But native Ashevillians and those who lived here in the 1970s and 1980s usually see it differently.

Asheville in 1983 after the addition of the Akzona Building (Biltmore Co. Offices.) Reverse reads “Asheville, N.C. still retains its resort atmosphere while also offering the ability to furnish many big city conveniences.”

In just a few weeks, Pack Memorial Library’s North Carolina Room will launch a new monthly series looking at exactly that question. Asheville In The 1980s: A Formative Decade As Told By Those Who Shaped It will kick off on Wednesday, April 27, with a look at a critical moment in 1980 when we almost lost 11 acres of downtown Asheville to a huge shopping mall. The six-part series will look at the renaissance chartered by citizens, social activists, businesses, and artists during this time. The series runs April through September on the last Wednesday of the month from 6:00 to 7:30 pm.

“We hope to dispel the myth that Asheville was all boarded up,” says Julie Niwinski, Head of Adult Services at Pack.

Building at corner of College and N. Lexington. Photo by Rachel Stein circa 1980.

Far from being boarded up, at the beginning of that decade Asheville was rated by Rand McNally’s Places Rated Almanac in 1981 the number 1 place to live among 125 small metro areas (under 125,000 population) and number 41 among 277 metro areas of all sizes. The Places Rated authors David Savageau and Rick Boyer (who moved here a couple of years afterwards) stated that they based their ratings on “nine equally weighted standards—climate and terrain, housing, health care and environment, crime, transportation, education, recreation, culture and the arts, and economics.”

So what was going on here in the 1980s to rate so well? Each of the six programs in this series delves into that question from a different perspective, including the arts, business, architecture, downtown housing, social activism and civic engagement.

We’ll soon be publishing more details on each program, but for starters here are some comments from some of the program moderators and an overview of the whole series:

Jan Schochet, Asheville native and proprietor of A Dancer’s Place on Patton Avenue that was next to her parents’ Star Bootery store, says, “Asheville has always, always had a vibrant art and cultural scene. The question that we faced was what to do when we lost the city’s center—when the big stores relocated to the malls.”

J.C. Penny’s was the last department store to leave downtown in 1989.

Rob Pulleyn, founder of Fiberarts Magazine in 1975 and, later, Lark Books, recalls, “Lower rents and sagging property values in the mid-seventies lured entrepreneurial and pioneering small businesses and made downtown the vibrant and viable place we now see around us.”

Wall Street from the corner of Battery Park Avenue intersection reveals the remodeled rear entrances of the buildings forming a boutique district. Photo by David Black, 1975.

Ann Von Brock, early director of Helpmate and later with United Way, participated in and watched social agencies grow out of social activism. “Asheville was on the cutting edge in so many ways,” she says. “We had a strong legal aid society, food bank, women’s services, an AIDS project, and more, supported by local businesses, city and county government, United Way funding and Community Foundation funding.”

Ellen Clark, former Executive Director of Western Carolinians for Criminal Justice, sees this part of Asheville’s history as “looking at the homegrown efforts that took off, and how they have influenced who Asheville is today.”

Deborah Austin, Director of the Arts Council in the 1980s, says, “The partnerships that were unique in the eighties were connected with the arts and outdoor celebrations. We had activity from the City, the Chamber of Commerce, The Arts Council, and Quality Forward.”

Asheville native and historian Kevan Frazier believes that you can’t have a vibrant downtown without housing. “The conversion of abandoned office and warehouse space in the Central Business District during the eighties,” he says, “would come to be one of the key elements of Asheville’s Renaissance.”

Leslie Anderson, Asheville’s first director of Downtown Development, agrees about the effects of activism and sums it up like this: “Asheville today may be so prosperous and so vital because there is a history of something behind that, a history of activism and engagement that I think is a hallmark of our community and I believe is a key reason for our success.”

Peggy Gardner’s project to “wrap” in strips of cloth tied together, all of the buildings in an 11 block area that would have been demolished under the Strouse Greenberg & Co. downtown mall complex proposal. Two hundred people participated. Photo by Annie R. Martin, April 19, 1980.

Asheville in the 1980s:  A  Formative Decade Told by Those Who Shaped It
These programs are comprised of panelists and two moderators, all of whom were involved in their subject area in Asheville during this decade. Each program will also include guests in the front row to enlarge the stage and to help answer questions from the audience. These programs will be held on the last Wednesday of the month, 6:00—7:30 p.m. We hope to see you there! 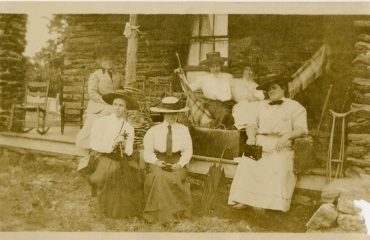 21 Comments to “ Ever Wonder How Asheville Got To Be So Cool?”