At first glance, the photograph (Image 1) gave few clues as to precisely where or what this was, other than it appeared to be a massive construction site in Asheville. The automobiles and old construction equipment hinted at the 1920s, but where and when was this photograph taken?

So this was Southside Avenue, circa 1926. But what was the demolition? Could this have been continuing the construction of Coxe Avenue?

We ran the digital image through a few Photoshop filters and zoomed in, hunting for another clue.  We found it.

Image 3: In the distance, in photo O095-DS, is the 1926 location of J. Gorham Low, Exide Batteries retailer, near the corner of Coxe and Hilliard. (click photo to enlarge)

On the horizon, below the Battery Park Hotel, we spotted a building marked “J. Gorham Low.”  Bingo!  The City Directory indicates that in 1926 Mr. Low, who owned an Exide car battery shop on Biltmore Avenue, opened an additional shop on the newly created Coxe Avenue, near the corner of Hilliard. (Image 3)

That told us that the street in view, in the upper left corner, was Coxe Avenue; that it had traffic and had already been completed.  So the demolition was not for Coxe Avenue.

Searching our database for photos of Coxe Avenue in the ‘20s, we found an aerial view of Asheville shortly after the avenue was built (Image 4; photo #A019-8).  And there, just east of Coxe Avenue and north of Southside, was a hillside of woods and farmland.

Image 4: Aerial view of Asheville circa 1925. Image A019-8 from the North Carolina Collection at Pack Library.

Zooming in on the buildings in the lower right-hand corner, we see that in fact they are the same shops that appear in the photo from the Mundy collection. (Image 5) The buildings match, right down to the large sign on top of the Asheville Machine Company.

So what we see in the construction photo (O095-DS) is the creation of what we now call South Slope:  Millard, Buxton, and Banks Avenues were all carved out of that hillside.

We asked historian and architectural designer Dale Slusser, “Did the hillside have a name?”  The answer:  Buxton Hill, of Thomas Wolfe fame.

Dale, who has written extensively on the history of Ravenscroft and environs, filled in some detail for us:

The hillside to be demolished was the old Rev. Buxton Estate (Image 6), which also became the North State Fitting School of Thomas Wolfe acclaim. The hill was demolished in 1926 for the Buxton Hill development and was turned into Banks Avenue and Buxton Avenue, now called the South Slope, known for enterprises such as the Green Man Brewery.”

Dale referred to the “Bird’s-Eye View of the City of Asheville” (MAP202) which shows the hillside and the Buxton Estate (South Slope) as it appeared in the late 1800s (Image 6). Southside Avenue is in view in the lower right-hand corner.  Rev. Buxton’s home, which was demolished, was just above the avenue.

Image 6: The hillside as it appeared in 1891.  Street in the lower right-hand corner is Southside Avenue; just above it was Rev. Buxton’s home. [Map202 from the North Carolina Collection at Pack Memorial Library, Asheville, NC]

Dale points out that in the demolition photo (Image 7), on the hill and barely visible through trees and clouds of dust, one can see the old Shoenberger Hall which had been at 60 Ravenscroft Drive.  The hall survived the demolition.   He says the building to the left of Shoenberger, mostly obscured, was the Arizona Apartment building which is also visible in the aerial view.  He sent us a photo of Shoenberger Hall (Image 8), with a note that “In your photo you can make out the end of the porch on the right end of the building.”

Image 7: Detail from photo O095-DS shows Shoenberger Hall, which survived this demolition, but was razed in the 1970s. On the left is Arizona Apartments which was at 43 Ravenscroft Dr.

This, then, was a photograph of the demolition of the “hill wooded by magnificent trees” mentioned in Thomas Wolfe’s Look Homeward Angel.  Dale describes the hill’s history in his book “The Ravenscroft School in Asheville:”

Image 8: West front of Shoenberger Hall. One end of the porch on the right is in view in photo #O095-DS. (Image #C762-8 from the North Carolina Collection, Pack Memorial Library.)

[D]uring the first half of the twentieth century, while Ravenscroft was being used as a boarding house and in the hands of successive owners and managers, Shoenberger Hall remained in the hands of the [Episcopal Church’s] Missionary District of Asheville. [It was the home of Bishop Junius Horner and family, and of Rev. A. H. Stubbs.]

. . . Just south of Shoenberger Hall, though not technically on missionary district land, was Buxton Place, the former home of the Rev. Jarvis Buxton, founder of the Ravenscroft schools. (Image 9) The Rev. Buxton’s daughter, Mary R. Buxton, had inherited the home following the death of her father in 1902.  Mary, not surprisingly, opened a portion of her home as a boarding house named ‘Buxton Place.’ The other portion of the home was leased to the ‘North State Fitting School.’

Image 9: The old Buxton home, at the end of Church Street, was part of the demolition. Photo taken circa 1912. (#F741-5 from the North Carolina Collection at Pack Library.)

Image 10: Photo A019-8, taken prior to the demolition.  Annotation added by library staff. (click photo to enlarge)

. . . The award-winning hometown author Thomas Wolfe was not only one of the first students of the school (1912-1916), but he also immortalized the school and the nearby Shoenberger Hall in his 1929 novel, “Look Homeward, Angel,” when he wrote, ‘Mr. Leonard had leased an old pre-war house, set on a hill wooded by magnificent trees.  It faced west and south, looking toward Biltburn, and abruptly down on South End. . . .’

Dale goes on to describe the fate of the estate and the hillside:

Unfortunately the North State Fitting School and Buxton Place did not survive the real-estate frenzy of 1920s Asheville.  In 1926, the “Buxton Hill Investment Company” was organized to develop the ‘Buxton Hill Subdivision’ on the former site of the Rev. Buxton’s property. (Image 11) Not only was the house demolished, but the entire hill was also removed and lowered about 20 feet, leaving a cliff-faced dirt bank along the south property of Shoenberger Hall.  [The dirt bank] remains to this day.” (Slusser, 2014)

Today the region that was once Buxton Hill is a mix of old-fashioned shops and trendy new businesses.

Looking south from Banks Avenue, over the shoulder of Vortex Doughnuts (left), is a view from what was once Buxton Hill.

The “cliff-faced dirt bank” — the gash in the hillside that is visible in the demolition photo — is still there (Image 12), and is a backdrop to the parking lot facing Buxton Hall Barbecue, Catawba Brewing Company, and Vortex Doughnuts.

Image 12: The steep bank, visible in the demolition photo, is now the embankment overlooking the Banks Avenue parking lot. (click to enlarge)

On Southside Avenue, where the machine and automotive shops stood, City Transmission Service stands with its whimsical mural of gears. (Image 13)

[3/18/2016 3:06pm:  Updated to include additional names and photo of Banks Avenue establishments facing the cliff.] 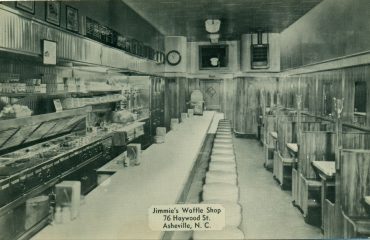 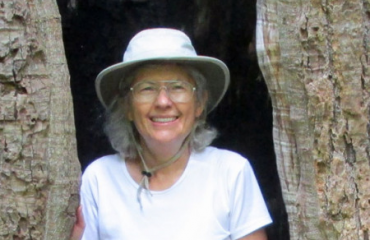