The Buncombe County Community (Night) School’s literacy program was a forerunner in the state to help teach literacy to adults. We wrote about it in a post two years ago, which covered rural Buncombe County citizens being taught to read and write. A not-as-well-known part of the Community School’s program was the Americanization Classes that were held to teach the English language to foreign-born persons. In the early 1920s Asheville was home to Italians, Russians, Greeks, Roumanians, French and Poles. Americanization classes were held in the Orange Street school, and interestingly enough, also at the Grove Park Inn, where many foreign-born people were employed as chefs and other grounds workers.

This photograph shows the teacher, Mrs. Knight with three of her pupils, all Italian cooks at Grove Park Inn, 1924-25. They are identified as L to R: Pasgreale Moschio, Lugi Cantarella and John Cantarella.

John is listed as a chef at the Grove Park Inn in the 1925 Asheville City Directory along with cooks, Sidney, Lewis (probably refers to Lugi) and Antonio Cantarella. The Cantarella family was from Moasco, Italy. John appears in New York City in the 1930 census.

Mr. Ferucio Paganin, pictured below, according to Naturalization papers was born in 1894 in Taibon, Italy and came to Asheville at the age of 31, leaving his wife still in Italy.

James Klomenous Karembelas pictured below in 1925, came here from Sparta, Greece, born 1899, and is listed in the 1926 Asheville City Directory as the proprietor of the Glen Rock Cafe located across from the Railroad Depot.

Speranza Solary, a widow, immigrated from Italy and with her children, Emma (shown here on left), Leno (a stone mason), and Virginia lived at 10 Cherry Street in 1925. Speranza died in Asheville in 1958. 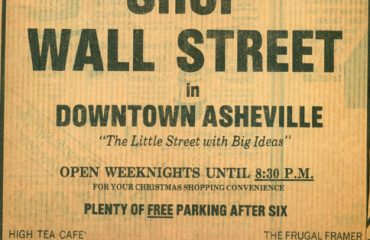 The Little Street with Big Ideas 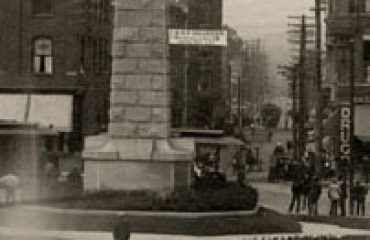