One of the more unusual aspects of public library service in Buncombe County is the existence of two library/ recreation center/fire station facilities in the City of Asheville.  I know of no other locality in North Carolina with similar buildings.  There are a few library and recreation center combinations and at least one library emergency medical services  facility in the state, but the combinations that comprise the East Asheville and South Asheville/Oakley branches are truly unique.  As the residents of East Asheville begin to press their community’s need for a better library facility, the story behind these strange combinations is worth telling.

Pack Memorial Library on Pack Square was constructed in 1925 by the City of Asheville and along with the nearby Colored Library in the Y.M.I. building on Eagle and Market streets served as Asheville’s only public libraries.

Market Street Branch Library in 1953, at 39 Market St. South in the Y.M.I. (Young Men’s Institute) Building. The library branch, first called the “Colored Library,” opened in 1927 on Market St. South. Name changed to Market Street Branch of City Libraries in 1951. Branch moved to another part of Y.M.I. Building, facing Eagle St, in 1959. That branch closed in 1966, after the library system desegregated in 1962.

By the nineteen fifties, the City was slowly recovering from the Great Depression and was gradually expanding both in population and land area.  Citizens in the outlying areas of the city began to press both the library board of trustees and the city government for the establishment of branch libraries. Over the course of some fifteen years this was accomplished and accomplished in a novel way.

Asheville City Manager Weldon Weir was hard pressed to keep up with the growing city’s infrastructure needs and in cooperation with library board chairman and local architect Anthony Lord, developed the concept of building combination library, recreation center and fire department buildings in the four corners of the city. West Asheville on Haywood Road was the prototype and opened in 1953.

Photograph taken in the firehouse portion of the old West Branch building as architect Anthony Lord (sitting) and Ed Sheary look over plans that Lord drew in 1953, to see if that space could be renovated for the library. At that time the Fire Department was looking at building a new station in West Asheville. The third person may be Bud Taylor who was Library Board Chair at that time. Photo from the Anthony Lord Collection, print via Peggy Gardner.

The North branch was followed by East Asheville, also known as Beverly in 1965.   The South Asheville/Oakley, facility was opened in 1970.  The Oakley location was controversial in that the  library director and board did not want it built on the Fairview Road location, claiming it was too far removed from the axis of population growth along Hendersonville Road.  The library folks were right, Oakley was by far the least successful of the four and its existence hampered the development of library services in the city’s southern quadrant.

Photograph of exterior of Oakley/South Asheville Branch Library in summer of 2005. Photo by Tammy Silver of Buncombe County Libraries.

The East Asheville facility on Tunnel Road is by far the best of the remaining two facilities.  Its location remains ideal to serve the Beverly Hills and Haw Creek neighborhoods and the lot and adjacent park will support a substantial addition.  The building itself represents some of architect Anthony Lord’s best work and is wearing its fifty years of age gracefully.   The politics are not as simple as they were fifty years ago.  The library was shifted from city government to county government control as part of the water agreements of the nineteen eighties. The fire department and recreation facilities remain under city jurisdiction.   Nevertheless, if the necessary agreements can be worked out and the community’s support remains strong, East Asheville could remain an exemplar of the civic vision of Weldon Weir and Anthony Lord for generations to come. 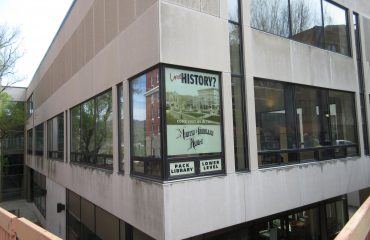 The North Carolina Room Welcomes You From Street Level