I have worked in the North Carolina Room for over 22 years, and I never knew–or even had a glimpse–of this part of Asheville’s history: the huge impact of Jewish merchants on downtown Asheville. Whole blocks of stores on Asheville’s main streets, South and North Main, Patton Avenue and Haywood Street, were owned by Jewish merchants.

These questions and others were talked about in last Thursdays, August 27 program, “Missing History: The Family Store” sponsored by the Friends of the North Carolina Room.  Asheville native Jan Schochet presided a panel of four guests, Skip Pearlman, David Schulman, Ellen Carr and Dennis Winner.

Jan began with an overview of Jewish merchants in downtown Asheville, saying that there were over 450 downtown from the 1880s through the 1980s.  She explained that Jews in Europe weren’t allowed to own land or enter into the trade professions, so they often became merchants, which they continued after immigrating to the United States. There were businesses such as The Baltimore Bargain House, who would set up an individual with merchandise for a certain amount of money, which the person would peddle until they became prosperous enough to own their own stores.

Jan, as well as each panelist came from families who owned businesses in Asheville, Ellen Carr’s Tops for Shoes being the only business still in operation today. The audience of 190 people were thoroughly taken in by this unknown and often untold history. Each panelist’s specific story brought the history very much alive. These people were talking about their lives, and their parent’s lives and their grandparent’s lives.

How did each business begin? How and why did a grandparent come to Asheville? Did the women work in the stores? With the exception of Tops for Shoes, how and why did the other businesses end?

At the end of the program, I, as well as most people I heard from, wanted to hear more. We decided to ask the panelists if they’d respond to two more questions.

We asked: What were some memorable store stories that you remember? Funny or weird incidents, customers or salesmen. Or touching incidents.

David Schulman: As I tend to love the more humorous side of things, here’s a little story of stark differences in background. After I married my first wife who had grown up in New York, Nancy came to work with me one day in Sylva. A preacher I knew well came in our store to kindly introduce himself to my new wife, and upon hearing that she was Jewish, thought she would be pleased to know they had just come back from visiting her “homeland,” meaning a trip to Israel. Nancy was infuriated and said to him, “Oh, you just came back from Long Island?”

Dennis Winner: I have no stories to add other than with respect to my Dad warning Irene Alexander that she would have nasty things said to her. In fact that did happen for a while. [This is in reference to an incredible story Dennis told about his father wanting to hire an African-American for a salesperson on the floor, so he went around to the manager of Bon Marche and several other stores and asked them to do the same on a certain day. Irene had previously worked as his elevator operator and he asked her if she would be interested in being a salesperson. He warned her that it might be difficult.

Ellen Carr: One of our first employees at The Bargain Center (where Downtown Books and News is now) was Quanita Leake, who worked for us for 38 years (she moved up the street to Tops). She was African-American and so shy when she started that she used to hide behind the clothes in the Bargain Center. My mother fired her, and then her mother came and begged for her job back. She turned out to be one of our best employees ever.

Another incident involved our salesman Jason Gaddy (still with us) who felt a woman’s toe to see if the shoe fit. She had a very sore toe and, when he touched the toe, she clobbered him on the head so hard she almost knocked him out.

Our staff always used to dress up at Halloween. One of our employees, Evan Sluder, dressed in head to toe black and had chains hanging from his waist and earrings in his ears. A customer came up to him and said “I like the way your employees dress up for Halloween.” He said, “It’s great, isn’t it? Next year I”m going to dress up, too”.

I know there are many more stories, but those are a few of the ones I remember.

Ellen Carr’s parents Louis and Sylvia Resnikoff opened the Bargain Center in 1953 at 69 N. Lexington Ave. Following the business motto, “Take care of your customers and everything else takes care of itself,” their business grew and expanded.

Jan Schochet: There are a bazillion stories, customers, salesmen, employees that I remember. But something I totally remember:  When we took the dance clothing and shoes out of The Star Bootery (16 Patton Ave) to open A Dancer’s Place at 14 Patton in August 1978, I was working with one of our customers who was a dancer. She had graduated from high school and she was my assistant manager, her first full-time job I think. She lived in Mills River.
I don’t think it was right at the beginning, but within the first year maybe, a guy breezed in. A large guy about 6 feet, square shape, nice big-city clothing black pants, white shirt and slicked back black hair. He breezed in and exclaimed loudly, “I’m from New York and I know ALL of these leotards.” (To eliminate shoplifting I’d designed a way to pin up all our leotards on the walls–it was like an art gallery of dancewear.)
He’d go up to one shiny red one with little straps and say, “I’ve got that one. I wore it to a party last new years’ eve.” Then, “I love THAT one”–a sleek black number with velvet straps and rhinestones on the straps–“it’s one of my favorite ones!”
He asked us, “Am I the first cross-dresser you’ve had in here?” We looked at each other and said at the same time, “Probably not,” “no.” He seemed disappointed. He went on like this for 20 minutes or more, extolling all of our styles. He kept looking back at us as though he were shocking the heck out of us. We just looked at each other and smiled. We were from Asheville and we’d both already seen a LOT both in the store and in our everyday lives. He was NO surprise to us. Although we knew he thought he would be. But he was surely one of the most animated and energetic, enthusiastic customers we ever had. I don’t even remember if he bought anything. If he did it was only something like shiny tights.

1980s photo showing the Dancer’s Place and the Star Bootery just in view past the vacant Leader building, Patton Avenue.

We also asked, since downtown businesses were closed on Sundays, did Jewish merchants close on Saturdays, or at least on High Holy Days, and if so, was that accepted by the non-Jewish patrons?

Dennis Winner: No Jewish merchant could be closed on Saturday and survive. Winner’s always closed on the High Holy days.
Jan Schochet: And yes, that is also an interesting quotation: “no store could be closed on Saturday and survive.” That is true. There were more shoppers downtown on Saturday than all the other days combined. That is when everyone was off work and when they planned to shop (as they went to church on Sundays and Asheville had Blue Laws* prohibiting stores from being open on Sundays.)
Jan added: I don’t think any Jewish merchants in Asheville closed on Saturdays. The majority that I knew were Reform and there were no Reform services on Saturday. We always went to Temple on Friday nights. [Dennis Winner added the comment that: “Cbht (Kabbalat services) always had Saturday morning services while Unger was Rabbi.]
But when I was really little, all the downtown stores stayed open late on Friday nights. My parents and uncle did too. At least for part of the year (maybe fall and Christmas season). I assume they figured they’d forgo the religion to get their family on solid footing with the income. Always always always closed for Rosh Hashanah and Yom Kippur. My dad would put a hand written sign (in his terrible scrawl–he was always teased that he should have been a doctor because of his terrible handwriting) on the door at closing the day before. Just a sheet of paper that said “Closed Monday (or whatever day he referred to) for religious observance.” I do know a lot of people would come to the store and be disappointed. But many came back the next time they could and would say “We came on (day) and you were closed. So we’re coming back today.” Not sure if they felt inconvenienced (I don’t remember that vibe) or out of admiration (don’t remember that vibe either–just a statement of fact).

Ellen Carr. We have always been open on Saturday, that being the best day of the week by far. We have never opened on the high holy days of Rosh Hashanah or Yom Kippur. This is a tradition that my parents started and we have kept going.

David Shulman: My parents’ business as well as my businesses and the two other Jewish businesses in Sylva were always open on Saturday as it was until the last couple of decades or so the busiest day of the week. I guess it was a practical compromise all of us felt God would understand. As well as being open on Sunday would have been looked upon as rude to our gentile customers “back then” we thought. I think Sky City Discount was the first retail in the area to open on Sundays, then K-Mart, etc.

Skip Pearlman: During the presence of the business in downtown locations, the business was closed on Sundays and the Jewish Holidays of Rosh Hashanah and Yom Kippur. In 1973 or thereabouts that changed. The business moved to Tunnel Road, diagonally across from The Asheville Mall. Sunday openings had become commonplace as many businesses left downtown Asheville. I personally had a more secular approach to being observant. Bottom line we stayed open on Sundays and Jewish Holidays.

Pearlman’s Furniture Store at 56 Haywood Street as it appeared in the 1950’s. Bon Marche Store for Homes at 48-52 Haywood Street is seen to the left.

* Sunday legislation, known of as Blue Laws, were mostly meant to keep Sundays uncommercialized, which followed along with the idea of the importance of having a day of rest. Businesses were for the most part, not allowed to be open. The laws increased and decreased over the course of Asheville’s history. The Asheville City Council repealed Blue Laws in a 4-2 vote in 1970.

Jan Schochet coedited with Sharon Fahrer, The Family Store: A History of Jewish Businesses in Downtown Asheville, 1880-1990, published 2006. This book is available in the North Carolina Room and also available for checkout. It can be purchased at the Asheville Art Museum. 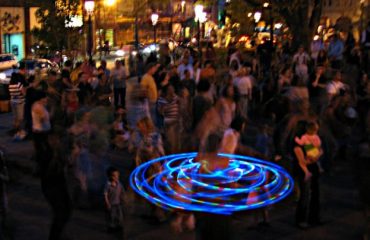 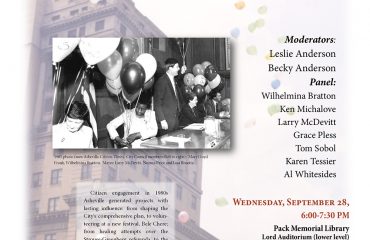 6 Comments to “ “Missing History: The Family Store.” An Incredible Look at Impact of Jewish Merchants on Downtown Asheville.”