The Appalachians have long been noted for the rugged individualism of their inhabitants. The terrain was and is difficult, limiting its occupants’ employment. In the late nineteenth and early twentieth century the area was conducive to small farms, cottage industries and the lone artisan. With rhododendron, mountain laurel, chestnut, hickory, willow and oak prevalent in the area, the materials for rustic furniture were at hand, ready to be used in their natural state, and suited to an independent craftsperson. For the most part the work required only rudimentary tools – saws, clippers, pen knives, hammers and measures.

By the late nineteenth century the train had arrived in most of the Appalachian areas. With it came tourists seeking the cool air of the mountains and contact with nature. What better way to commemorate their visit than purchasing a locally made rustic souvenir that would remind them of their adventure.

Miniatures are small versions of everyday normal-sized things. Generally inexpensive and often charming, these pieces made excellent souvenirs as they were more easily transported from a vacation spot to home than their full-size counterparts. Once home, they could be easily displayed or given as a gift from afar. Rustic furniture makers recognized the popularity of these small objects and often inscribed them with their place name.

The small rustic chair inscribed Asheville, NC 1904 was a staple of many rustic furniture builders. These chairs were modeled somewhat on the full size chair known regionally as a “settin chair.” As with much of rustic whether miniature or full-sized it is notched to give decoration.

Many of these souvenirs were sold throughout Appalachia over a long period of time. The miniature wishing well and the moonshine still are both from the 1930’s. The still, inscribed Moonshine Still Asheville, NC also has a notation by the original purchaser penciled on the base – bought at Chimney Rock during the week of my vacation the last of October 1936.

All three of these objects have been found in catalogs of The Treasure Chest, an Asheville company, which sold Appalachian crafts.

Post by Lynne Poirier-Wilson, Friends of the North Carolina Room Board Member 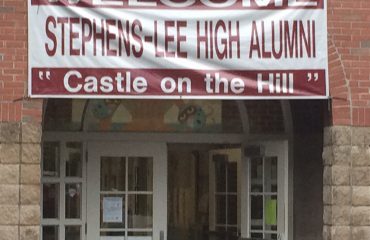 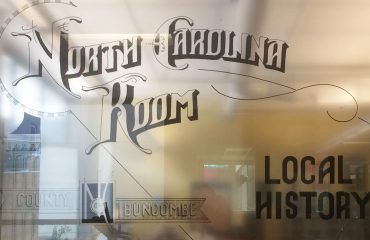 Join us for “Zoom with the NC Room” virtual programming!