The North Carolina Room, Pack Memorial Library currently has on exhibit through September, four exhibit cases highlighting Asheville Tourism Souvenirs. Of course, the exhibit set us on a research binge, trying to find out all that we could about the local souvenir trade. This is the second of an ongoing series, sharing some of the images in the exhibit and what we have learned.

Evidence of regional tourism souvenirs dates to at least the 1890s, created in part from the larger influx of tourists after the railroad reached Asheville in 1880. But tourist souvenirs here actually follow a craze that began in Europe and then spread to the larger cities in the United States. The boom was on by the summer of 1891 and it quickly spread across American cities. The first ad for “souvenirs” was found in Asheville newspapers in March of 1891, with brief earlier 1890 mentions of photographs available as souvenirs.

The 1891 souvenir ads were for cut glass, china and other novelties. These early Asheville souvenirs were on the more “elegant” side and were imported from outside the area. An interesting “foreign” example in the exhibit is the china pitcher with a windmill painted on it and “Asheville, N.C.” on the opposite side.

It appears that souvenir items developed from non-local images accompanied with the name of the town printed on it, to the inclusion of local images painted, embossed or engraved. An ad from 1898 by Dr. T.C. Smith’s Drug Store invites visitors to examine engraved souvenir spoons with sketches of Biltmore, the Battery Park Hotel and other local scenes that were produced by the Shepard Manufacturing Company in Massachusetts.

A more sophisticated version of the “windmill” cup is this nicely painted demitasse. Compare the painted scene to the postcard of same era.

An ad in the Asheville Citizen in November 1891, drawing attention to Arthur M. Field’s jewelry store’s newest souvenir addition of a silver thimble, recounts that “Souvenirs are still the rage here.” Actually, it was only the beginning. 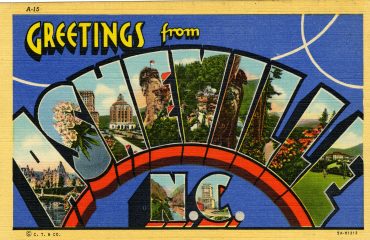