“My Dear Father, Richmond is sad to day,” begins the letter that Major David Rankin wrote to his father, William Dinwiddle Rankin, on May 11, 1863. “The news of the death of that great and good man Stonewall Jackson was received at a late hour last night and spread universal gloom over the whole city. The stores are all closed today in token of the sad event.”   Rankin relates particulars of the Confederate general’s death, then wonders, “Who is to step in to the place made vacant by his death?”

David Rankin was born in Asheville in 1832, the son of William D. and Elizabeth Roadman Rankin. The Rankin family home was called Meadowbrook, built in 1848, it survives today and is known of as the Rankin House Inn. As a young man, David moved to New York City to manage his father’s mercantile business there. When the Civil War began, he returned home to enlist in the Confederate army. Rankin’s abilities were recognized by the new government in Richmond. He was appointed to the rank of Major and assigned to the staff of General Braxton Bragg in the Quartermaster’s Department. That position gave him good access to war news as it was reported in the Confederate capital.   In his letters, he relayed that news back home to his family in Asheville.

Fourteen of Rankin’s handwritten letters from the years 1862-1865 have been donated to the North Carolina Collection at Pack Memorial Library as part of the Rankin-Bearden Collection, MS250.   In this era of immediate news reporting, they stand as a reminder of the slow, often unreliable pace at which news once traveled. They also bring to life the events of a distant war, reframing historical events as personal history. They give us a chance to know David Rankin, a Southern partisan, within the context of his time and place.

Most of Rankin’s Civil War letters were addressed to “My dear Father.” They conveyed news of battles, generals, and strategies, along with his commentary. Those written in 1862 and 1863, the earlier war years, often reported Confederate victories. This letter written May 7, 1863 is an example:

“Since writing you last the smoke of battle has lifted to some extent and given us a feeble glance at the blood-stained field of Chancellorsville. I have seen and conversed with several participants in that bloody drama and all accounts concur in representing it the greatest and hardest fought battle of the war. The Yankees are said to have fought with unusual bravery and contested every inch of ground with more than ordinary stubbornness, and but for old Stonewall’s favorite and accustomed plan of penetrating and attacking their rear, it is doubtful how the tide of battle would have turned.”

Rankin’s account of the Battle of Gettysburg, written on July 8, 1863, testifies to the difficulty in receiving reliable news accounts, even in the Confederate capital. While some believe that General Robert E. Lee has triumphed, Rankin is skeptical:

“The four days fighting at Gettysburg Pa. is reported to have resulted in the most crowning triumph of the war. 40,000 prisoners are claimed for Lee, with a loss to his own army of 10,000 men. We got no papers by last Truce boat on yesterday, and the officers are reported to be very reticent and dejected. There has not been a line of official news of the great battle of the war by the government and nothing will be believed here till it comes over Gen Lee’s signature when everybody will know it is so. The possibility tho of the news we hear being so has created the liveliest enthusiasm… and given rise to such sanguine prophesies as ‘peace in 60 days,’ ‘Gen Lee in Washington,’ ‘Baltimore and Phila at his feet,’ &c &c, but we have seen too much of all such things to fly off into a general jubilee of exultation till the facts have transpired. ”

Rankin’s duties as a Quartermaster kept him behind a desk much of the time. However, as this letter written on March 8, 1864 attests, he occasionally saw battle:

“I was out with my Battallion the most of last week, guarding one of the entrances to the city against a surprise by the Yankee raiders—was in the bloody little fight Tuesday night at Greens Farm, but am not scratched. We peppered the Yankees smartly killing and wounding some thirty to forty of them, with two or three killed and a doz or more slight wounds on our side. There was only three wounded in my Battn. The night was pitchy dark and the rain was pouring down in sluices, which turned to a snow after while, and then a freeze, so that our coattails needed no crinoline in them by morning. A pretty hard night for boys that sleep in cozy rooms every night at home.”

As the war dragged on through 1864, the news from Richmond became increasingly grim. Rankin wrote on May 24: “Richmond is again one vast house of mourning. Her sons have fallen in every fight, and still the bloody work goes on.” In the last letter in this collection, written May 5, 1865, the end of the war is near yet the fighting continues. Rankin writes:

“Things look undoubtedly and undeniably blue in these parts just now. The people of the Confederacy are pretty badly whipd and if it was not for the confident tone of the army we might as well give up. Early has been whipd at Staunton and his forces scattered. His force was small and Sheridan went through it like a dose of salts…We have bright weather after so much rain and cold—the country is nothing but mud—but a few days of sunshine assisted by the March winds will dry the roads and then look out for the roar of battle again. The question of supplies is the paramount one here now. It is hard work getting enough to keep us all alive.”

In addition to the letters written to his father, Rankin also corresponded with this sister, Amelia Rankin Bearden, during the time when her husband, Marcus Josephus “Joe” Bearden was held prisoner of war. Those letters, along with the letters that Joe Bearden wrote to his wife, have been excerpted and are also available online through Pack Memorial Library’s North Carolina Collection.

Reminder to all of the members of the Friends of the North Carolina Room that this year’s social will be held at the Rankin House Inn this Wednesday June 24th. We look forward to seeing you there. 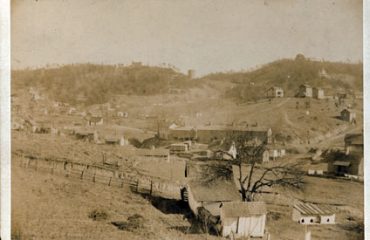 1 Comment to “ Civil War Letters from the Rankin-Bearden Collection”