The current photo exhibit in Pack Memorial Library’s North Carolina Room pictures some of the city’s most noteworthy fires. Among them is the Emporium Department Store fire of July 25, 1923.

The Emporium fire was, according to a later, undated Asheville Citizen article, “one of the most spectacular if not the most disastrous fire” in Asheville’s history.   The spectacle began when smoke and flames were discovered around 11:30 a.m., a time when the department store was open for business and the area around its 2 Biltmore Avenue location was bustling. The fire began in the alterations department in the rear of the second floor. In 15 minutes, the structure “was a seething mass of flames,” the Citizen reported the following day. “Fanned by a draft through the building, the fire spread with such speed that the store was doomed almost before the firemen could lay the hose.”   The spectators who had gathered watched as two women employees fell from upper windows to be caught by the large crowd of men below. A third employee, manager O.P. McArthur, fractured his leg when he jumped from the second floor to the sidewalk. Others “were not a minute too soon in leaving the building for great tongues of fire were leaping high into the air.”

Those flames threatened other downtown buildings. The Citizen reported that “for about 30 minutes, it appeared that the Library Building and the Legal Building were endangered. The rapid spread of the flames was one of the greatest sources of alarm.” Indeed, the entire downtown business district appeared to be threatened.   Fire departments from West Asheville, Oteen and Kenilworth were called in to help fight the fire. “Every available piece of fire-fighting apparatus was brought into play,” and “scores of citizens volunteered their services in assisting the firemen.” One volunteer, former fireman Ernest Davis, climbed to the roof of the Library Building to “direct a line of hose” toward the flames.   Eventually, their efforts prevailed and the flames were subdued. The Emporium Building was a total loss, but other buildings were saved from destruction.

The Citizen paints a lively picture of the spectacle that afternoon. Street car traffic was held up for two hours. No trolley was allowed to come within a block and a half of Pack Square. “The eager crowd and the lines of hose stretched across the tracks hampered the schedule.” The police placed ropes across the south side of the Square and the police chief assigned a detail to prevent the crowds from drawing too near the Emporium. “Quite a few onlookers were wet by the great streams of water when the firemen shifted the position of the lines.” The Central Bank and Trust Company was forced to suspend business for a time while thousands of dollars in cash and securities were locked into a vault made of steel and concrete.   Judge Pender A. McElroy adjourned Superior Court to permit his deputy clerk, a volunteer firefighter, to lend his assistance. A huge telephone cable that ran down the alley behind the Library was damaged. As a result, “about 120 telephones, including all in the Legal Building, the City Hall, and the stores on Biltmore Avenue, were placed out of commission. “ Pack Memorial Library was closed at 12:30 while the librarians and volunteers scrambled to relocate cabinets of card indexes, book and borrowers cards, the shelf list, more valuable books, and oil paintings of George Willis Pack and Robert E. Lee to City Hall for safe keeping. As water began to seep through the roof, “cases containing the encyclopedias were dragged from the reading room where water was coming down and all exposed books elsewhere placed under cover.”

The damage to the Emporium Department Store was estimated to be $200,000. It was a terrible blow to manager Jack Blomberg who had canceled two fire insurance policies one month earlier. The cause of the fire was unknown; the walls that remained standing were deemed unsafe and razed. Asheville City Directories show that a new tenant, the Plaza Theater, subsequently took residence in a new building erected at 2 Biltmore Avenue.

Note the furniture that had been carried out of Pack Library sitting around Pack Square. 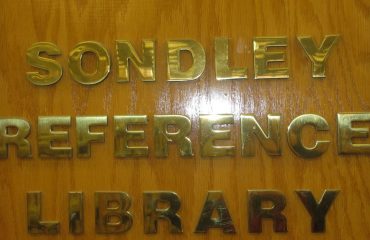 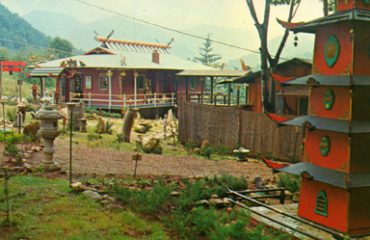