“Skyline Dairy was clean, modern, and cool. We would have cones of lemon sherbet after a Sunday afternoon drive.  Most often we ate in the car, probably because it kept my brother and I quiet and contained for a few minutes.  Always loved that facade — another example of short-lived good modern architecture, now just a postcard memory!” Ed Gunn, New York City

I’ve collected postcards for many years. A good portion of my collection of linen cards from the 1940’s and 50’s was purchased in the late 1970’s from The Asheville Postcard Company on Carolina Lane. Several years ago some 200 of the Asheville and Western North Carolina cards were added to the NC Collection. I’ve never stopped adding to my collection. Thank you eBay.

This past spring I bid on and won a card of an Asheville building I’d never seen before: Skyline Cooperative Dairy. A quick search of the NC Collection website led me to a single black and white photograph of the building. The brief citation noted that Anthony Lord designed it.

The NC Collection is fortunate to possess architectural plans from the architectural firm Six Associates that Anthony Lord helped found. In one of the many dusty tubes are the initial structural plans and elevations of Skyline Cooperative Dairy. As you enter Pack Library to attend “Let’s Talk About Anthony Lord” on August 28 at 6 pm, look for the glass case on your right containing the original elevation and a black and white photograph of the Skyline building.

In the late 1920’s a modern tunnel was bored through Beaucatcher Mountain providing direct access to downtown Asheville from the east via US 70/ US 74A.

In the spring of 1946, Anthony Lord began designing a modern cooperative dairy to be located on a plot of land in the Haw Creek Ward of Buncombe County. The plot is described as bordering a “concrete highway”, backed up by Ross Creek and the “Hildebrand estate”. Driving from downtown on Tunnel Road you will pass on your left The Cornerstone Restaurant (in the 1960’s it was a Shoney’s) and the exit/entrance to I240. This was the location of Skyline Cooperative Dairy at 110 Tunnel Road.

Skyline Cooperative Dairy was a project of The Farmer’s Federation. According to an article in Farmer’s Federation News in May of 1948 the cooperative received milk from local farmers and pasteurized the milk in 16 seconds in stainless steel equipment. At that time milk was delivered in large cans from the farmers. An innovation in the new building was a mechanized can washer. It washed and sterilized a can, replacing the lid as soon as the milk was removed. The milk, the article rhapsodizes, “is entirely enclosed in stainless steel pipes and tanks until it reaches the bottle.”

The dairy bar portion of building was “constructed of structural glass with chrome trim” and seated about 80 people. Alas, there is no description of the interior décor. In my fevered imagination I picture chrome chairs and stools padded with shiny, red or perhaps green patterned vinyl. In addition, an “open air terrace” seated an additional 80 customers.

The first City Directory listing for Skyline Cooperative Dairy on Tunnel Road appears in 1947. Listings appeared in 1948 and 1949; in 1951 the address changed to 110 Tunnel Road. In 1953 the listing is accompanied by a small ¼ page ad. There was a full-page ad in the City Directory in 1954 extolling the famous terrace and late night summer hours on Friday evening!

Listings in the City Directory for Skyline run through 1958. In 1959 the listing at 110 Tunnel Road changed to Coble Co-operative, Inc. and in 1960, the Coble Dairy Bar at 112 Tunnel Road appears. By 1968 when I got my driver’s license, the spot on Tunnel Road had become a Shoney’s with a Big Boy statue in front.

The purchase of a single postcard led me on a serendipitous search to discover a small part of the history of Asheville, a vanished building by a talented architect, and sparked my imagination thinking of what the interior of the building might have looked like. If you remember what the interior looked like, please let me know. And if you recently purchased a brownish-photo postcard of a Southern Engineering Steel Building on Haywood and Walnut Street in Asheville (drats), please consider donating it to the NC Collection. Just like I’m donating my postcard of Skyline Cooperative Dairy. They’re postcard memories of an Asheville that no longer exists.

Post by Friends of the North Carolina Room Board Member Terry Taylor.

The event is free and open to the public. 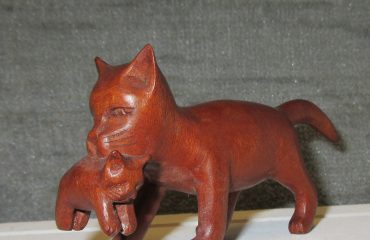 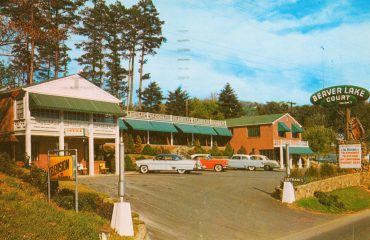