NC Room staff and the board of the NC Room Friends held a social on Tuesday, June 17th, to celebrate their newly formed Friends of the North Carolina Room. We also celebrated the life of Mary Parker (1914-2012), who would have been 100 years old that day. Mary was a longtime library supporter, and her family, the Patton-Parker family, has had a long tradition of friends and family joining for merry-making. The beautiful old home seemed glad for its walls to hold the sounds of laughter again. Fifty Friends attended. And the traditional front-porch-steps-photograph was taken.

Have you heard the old joke: “How long does it take to herd a large group of local history enthusiasts together?” Just ask photographer Cathryn McLeod, whose idea it was. The answer is, “You can’t.” Why? Because every one of them will say sweetly, “We’ll be right there …. as soon as we finish our conversation.”

Friends of the North Carolina Room Social, June 17, 2014. Except for the latecomers.

Photo hanging in the house of Mary Parker taken during the celebration of her 93th birthday put on by the Buncombe County Library June 17, 2007.

NC Room Librarian Zoe Rhine introduced other staff members Lyme Kedic, Betsy Murray and Ann Wright, and then told about the day when Lynne Poirier-Wilson was volunteering, scanning one more endless box of postcards, and she looked up and said, “I’ll be dead before I get through these!” That was the moment, Zoe figured, that the seed was planted in Lynne’s mind to start a Friends of the NC Room.

Lynne posed the question, “Why does local history matter?” Her answer? “One of the main reasons is that local history focuses on the ‘new’ social history — the history of everyday peoples. It is a challenge to the view that history was comprised only of great men and battles. Instead, historians now look at and put the ordinary men, women and children back into the human story. Asheville has no general history museum, but Pack Library’s North Carolina Room captures our two-dimensional local history and holds it for future generations.”

She went on to promote the North Carolina Collection at Pack and then asked for continued support from the community — first, as ambassadors, in letting people know about our collection, and secondly as financial supporters, in helping our collection move forward to serve the needs of future generations.

Lynne then introduced Peggy Gardner, Board Member of the Friends and close friend of Mary Parker.

Board Member Peggy Gardner speaking to the group.

Peggy talked about her effort to process the several generations of Patton-Parker family papers and photographs still in the house. She mentioned finding, among Christmas cards and utility bills, James Patton’s original missal he wrote in Asheville in 1839 to his children, admonishing them to do good things for the people in their community. Peggy then noted that this was the same letter she had encountered in a graduate Public History course as a prime example of someone passing important social information to their children.

Exhibits high-lighting some of the private Patton-Parker Collection were created for the social. The exhibit focused on the five generations and how all of them have contributed greatly to Asheville.

Ann “Duff” Parker Knight, a niece of Mary Parker’s, who along with her husband Paul are living in the house, went to great work to exhibit several 19th century dresses and baby clothes belonging to the family.

Deborah Austin taking a closer view of the beading in this dress we believe is the same dress worn by Martha Turner Patton (1843-1929) in the following photograph.

Other clothing items on display:

Board Member and Membership Chair Phyllis Lang staffed the membership table. Phyllis has researched and written extensively on the Patton-Parker family and was co-producer of the 1999 video Thomas Walton Patton: Asheville’s Citizen and Soldier, a copy of which is in circulation at the library.

And what’s a social without food?

Nan Chase Board Member Friends of the NC Room talking with Lynne and Zoe. Nan is the author of “Asheville: A History” and has just started a book tour for her just published book, “Drink the Harvest.”

And the beverages were a nice touch.

Believe it or not, there was also A LOT of local history conversation.

Jack Thomson, Executive Director of the Preservation Society of Asheville and Buncombe County talks with Dale Slusser, author of the recently published book, “The Ravenscroft School in Asheville.”

And there was lots of laughter.

And then, too soon, it was time for goodbyes.

The Patton-Parker home is currently on the market. The Preservation Society of Asheville & Buncombe County (PSAB) is assisting in the sale. This local historic landmark, owned and occupied by seven generations of the same family, has reached a turning point in its future. “We will make sure that future will be secure,” noted Preservation Society Executive Director Jack Thomson. “When this historic house is sold, we will place preservation covenants in the deed that will protect the historic nature of this special place in perpetuity.”

Camp Patton, built in 1868-69 by Thomas Patton after returning home from the Civil War, had previously served as a military encampment for both the Union and Confederate military. Patton employed African American carpenters to help him in the construction of the house.

To schedule a viewing of the house, please contact the Preservation Society offices at 828-254-2343.

Special thanks to photographer and Friend of the N.C. Room, Cathryn McLeod for volunteering to take photographs. Thanks also to Kathryn Temple and staff member Lyme Kedic for their photographs.

Thanks to all Friends who attended! Do you have any comments to add? 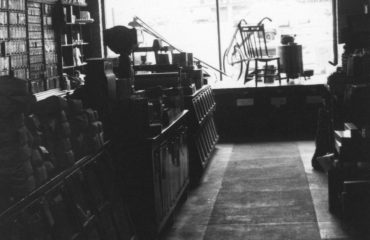