One of the delights of cataloguing incoming materials in the NC Room is that the smallest  detail can lead down a rabbit hole into worlds of stories. Recently, while working with papers of Albert Heath Carrier, partner of the Smith & Carrier architectural firm that designed many of Asheville’s historic buildings, I discovered an amazing story from a single name.

On May 31, 1907, A.H. Carrier sold “Lot No. 7” on the north side of West College St. to Y. Minakuchi, the contract of which is included in Carrier’s papers, and Yutaka Minakuchi also worked with Carrier on developing and promoting a U.S. version of the Japanese poetry matching-card game Hyaku-Nin-Shi (Hyakunin Isshu Karuta) that was to be called “Bibliquote.” Included in the NC Collection is a copy of their agreement that Carrier would fund the printing of the first thousand games for $150. Sadly, I can find no other information on their game.

“Minakuchi” seemed a singular name for Asheville at the time, so I began digging. The 1909 Asheville City Directory lists a “Yautaka Minakuchi” as the secretary-treasurer of the Asheville Pepsi-Cola Bottling Company while the 1912 Directory lists “Yutaka Minakuchi” living at 77 Montford Ave. with his wife Olivia (nee Buckner). According to Dr. Joseph D. Robinson, Carrier’s grandson, who donated the Carrier materials, Smith & Carrier designed this house for Minakuchi.

Vachel Lindsay, a celebrity poet of the early 1900s, made a walking tour of the southeast during which he stopped at the Montford home of the Minakuchis’, described in his book A Handy Guide For Beggars.

I looked up a scholar from Yale, Yutaka Minakuchi, friend of old friends, student of philosophy, in which he instructed me much, first lending me a collar. He became my host in Asheville. It needs no words of mine to enhance the fame of Japanese hospitality.

Yutaka Minakuchi was a native of Japan but moved to the United States where he was educated at UNC Chapel Hill (graduated with Bachelors and Masters of Arts, 1910), Oberlin Theological School and Yale. He became a missionary, writer and orator who spoke as part of the Chautauqua Circuit. In his Chautauqua bio and lecture listing (ca. 1916) it says he “served an American congregation in Asheville, N.C., for three years as its pastor” and his circuit lectures were on topics concerning Japanese culture, ecumenical studies of Eastern and Western religions, and American-Japanese relations.

However, the story of Yutaka Minakuchi takes a sad turn after leaving Asheville. At some point, he divorced Olivia and married Nellie Cook of Vermont ( “Yutaka Minakuchi: The Story of a Japanese Minister in Glover Vermont during World War II), settling in Peacham, Vermont where he became pastor of the Congregational Church in 1929, remaining until 1938. He then moved to Glover, the birthplace of his wife ( Peacham: The Story of a Vermont Hill Town), from where he continued to lecture and became a respected community member. But in 1942, the FBI arrested Minakuchi on charges of either distributing pro-Japanese propaganda (Peacham) or espionage by sending coded messages via radio (Vermont Reads 2009: Finding the Way Home). He was interred in a concentration camp in Maryland (probably Fort Meade) and was released a year later.

After his release, he moved to New York and Pennsylvania where he worked as a butler and became a naturalized citizen. After his wife’s death he returned to Vermont where he died one year before President Ford apologized for the Japanese internments in the U.S.

You really never know what stories you’re going to find in the North Carolina room …. 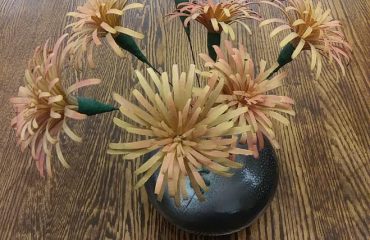 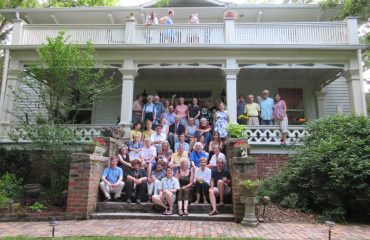 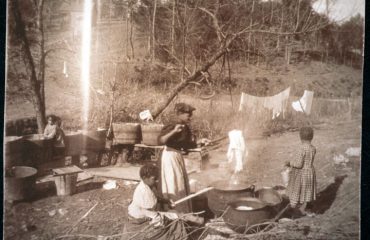 1 Comment to “ Yutaka Minakuchi: A Story in a Name”