Several years ago while researching Appalachian rustic for a lecture and exhibition at the Asheville Art Museum I came across two intriguing photos in the NC Collection.  They are from the Caldwell collection of glass plate negatives given to the library in 1944.  John D. Caldwell came to Asheville in 1903 to take the position of superintendent of gas operations for the Asheville Electric Company.  Among other talents he was an amateur photographer and documented Asheville history from his arrival until 1944 when he gave many of his photographs to the library.  It has been noted that he was responsible for the first demonstration of gas ranges in Asheville.

These images appear to document that demonstration, but they seem such an odd juxtaposition.  We see a rustic log-cabin interior, filled with rustic furniture and what appear to be small rustic souvenirs on the background shelf and hanging from the ceiling.  It’s interesting to note that these rustic pieces are wonderful examples of some of the best rustic pieces made in the Appalachians.  They are finely crafted, many of them notched for added decoration and the twig fill is perfect.  We only wish that we knew who made them.  Alas, they remain anonymous, but the stage is set for a demonstration of gas ranges (in an electric company showroom – note the electric fan on the stove to the left) by a crisply attired woman standing next to a table covered with bowls and pitchers.  Why demonstrate a truly modern object in a rustic space unless the scene was set with the odd juxtaposition in mind – hand-made rustic versus machine-made modern.

Sometimes we just don’t have the answers.  If this was an impressive debut for gas ranges you would think that the newspapers would have covered it, but a perusal of the 1905 newspapers brings no mention of this auspicious event.  We know that electric stoves were still considered a novelty in the 1920’s while the gas stove had become viable since the 1880’s so a gas stove is not surprising in 1905, but it also means that Asheville had gas lines available to its citizens.  We hear often about the train opening the mountains to settlement and tourism, but not so much about the effect of gas and electric lines.

The woman in her light colored uniform-looking outfit may epitomize the push for cleanliness in food handling which was a major focus in the early 20th century.  The Pure Food and Drug act was enacted one year later in 1906.

No matter what the answers are we are left with two fascinating photographs that document a little known, but important demonstration in Asheville history.  And we are left to admire the well-made rustic pieces and their counter-parts in the machine-made stoves. 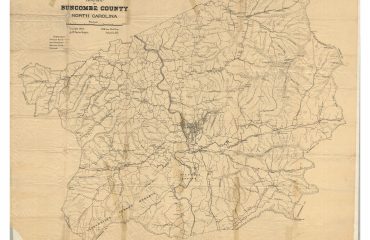