It is perhaps odd to begin a brand new blog–a professional library blog—with a  woo-woo* story.  But it would not seem odd if you worked in the North Carolina Room at Pack Memorial Library, where woo-woo experiences are as common as pickles next to a grilled cheese sandwich.  When this one occurred, I vowed to start recording them.  It soon seemed like a perfectly respectable “blog category.”

*Woo-Woo (or just plain woo) adj. “concerned with emotions, mysticism, or spiritualism; other than rational or scientific; mysterious; new agey.”

I was reading through a roll of 1885 microfilm, which happens to be a negative copy, which means it is really hard to read.  I was looking for early announcements of when Riverside Cemetery (then called Asheville Cemetery) was being built.  We have no early history on the cemetery, only a brief announcement in October of that year when the city was still trying to decide where to put it.  I was also trying to verify whether or not Charles T. Colyer, a landscape architect then living in Asheville, was the landscape architect.   The problem is that not many newspapers survived from this time period.

In the “About Town” section I saw a notice where W.O. Wolfe, the father of Asheville author Thomas Wolfe, got the contract for erecting a new front porch on the courthouse to replace the dilapidated one — the new one was to be of iron.  Because it is my nature, as well as the nature of my job, to go off on tangents, I wondered if we had a photo of the iron porch on the courthouse, so I got up to look at photocopies of the building under “Public Buildings” but we only had one photo of that 1876-1903 courthouse.  So I went to our photograph database to see what other images we had of it and found a photograph we have of a man carrying another man on his back on top of a high wire in front of the courthouse.  I am looking at the photograph. The phone rings.  A zippy young man had found some cool images on our website and wanted to know how to get copies.  I told him the spiel and asked him what the ID number was for the photograph that he was interested in.  I clicked out of the record for the high-wire act and put in the ID number for the photo he was interested in . . . and it was the photograph of the high-wire act.

It turns out that this patron was opening a new brewery in town, Hi-Wire Brewing, and he wanted to put the photo up inside his business.

And, as if that weren’t enough, when librarian Ann Wright went home that night, there sat a beer glass on the kitchen counter with the label, Hi-Wire Brewing.  Her husband had gone out with a friend that day and got the glass free if he ordered the new beer.  And “Cheers” to the new brewery. 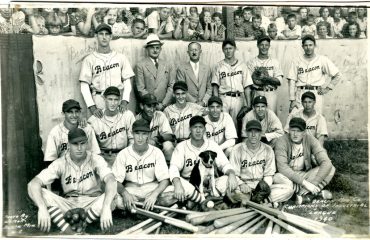